Background: As part of the Education and Social Justice Fellowship, in June 2015 student Caitlin Snell interviewed Debbie Ense, an early childhood education teacher in M’Chigeeng First Nation, located in the Manitoulin District of Ontario, Canada. Ense works with children between the ages of 3 and 7, teaching them about Aboriginal culture through language and tradition. In this interview, Ense reflects on her responsibilities within the community, as well as the importance of early education.
How long have you lived in this community?

Pretty much all my life, but I did take off now and again to go live in Toronto for a few years, went out west for a while, but I always came back. I actually came back to settle down probably when I was in my early twenties, came back, settled down, got married, had a family.

How long has your family lived in this area?

My family’s from here and they didn’t move; they stayed here.

What are some of the roles and responsibilities of an early childhood education provider?

It’s like a daycare system; we work as teachers. We take care of kids who are 3 to 7 years old where I work now. So we supervise and watch them and teach them the language, immersion, so they’re right immersed in the language. And then, more so we even follow a system, and that’s more like a calming effect. Like our furniture’s more like, instead of being so colorful, they have wooden chairs, wooden tables; it’s a more relaxed environment. We work outdoors more often, too; we follow the seasons like ice fishing, we go fiddlehead hunting—to eat fiddlehead sticks once they spring up in the spring. We make medicine, you know how you make ointment for rashes and stuff, and we make ointment out of pop-up buds, cedar, and willow. We make that medicine, and it’s good for rashes, burns, aches and pains, anything that ails you. And at the end of the season the kids get to keep some, and we keep some for our program, too. We go on medicine walks, so we go out walking and our guide will pick up something, and he’ll tell us what it is, what it’s used for, how to do it, and what we need to make a tea or what we should do with it, and he’ll explain it to the kids. We’ll do it once a week probably.

How is the academic curriculum and cultural education balanced for the students in your program?

It’s a five-year immersion program, so we started with early learning kindergarten for two years. And what we wanted to do was get them immersed in the language and do language, language, language for the first few years. So this September, the age-appropriate ones—I think there’s about 10 of them—now they’ll have the language from two years of early learning kindergarten. Where we would be able to teach them the same things, same academics in the language, they can count like “Bizhig, Niizh, Niswi, Niiwin” anyway. And right now, most of the kids understand what you’re saying to them and they can answer back, not all of them, but most of them, and they can understand you and that’s what we want is speaking more.

How do the parents and families receive this language and cultural immersion?

Well, they were worried at first, but we told them you know what, if they’re coming to our program they have to be committed, because this is already two years of language and they’re going into grade one; we can’t have them stop halfway through our program and jump into the mainstream because they’re going to be lost ‘cause who’s teaching them and what do they know in the language. So we told them that they have to be committed for the full five years, and this is what we want and then the last year is going to be 50 percent. Fifty percent English and 50 percent in the language to get them ready into the mainstream. There’s parents that work extra at home with them, but we didn’t have to worry about that because they’re all coming from an English home already so they’ll get that anyways, and they’ll get all the media there like the computers and stuff at home anyways, and anything that they need to learn at English is at home.

How are these language skills supported after this program in older grades of the KTEI school?

Yeah, they would probably have a little bit of classroom time. I don’t know how long it is—the last time I checked it was 50 minutes a day and probably like, a half hour now. I don’t really know, but they would have language class from “K” through eight in the mainstream and that’s where our kids would have the language. What I think would be good is if we had this age group now, they’re going to be one, we would have another intake. So we have another intake already, there’s 14 kids enrolled, but instead of having it as a pilot project, we need to keep on going. If we stop, then we’ll be back at day one again.

How long has this program been going on?

Two years. And it was a big decision to leave where I’d been working for 20 years and where I’d stay with my seniority and all that so it was a big move.

How do the students feel about learning the language of their culture?

What are some of the cultural traditions taught in the immersion program in addition to the language?

Well, like, we had a “berry teaching.” We bring in our elders, we have some elders from around the community, we bring them in and they help us out and they come in and help us plant. We have one there that does “water teachings,” teaching us to respect water. We had another one—she works with us and she did our berry teaching—teaching kids a story about the berries and respecting berries. Then the making of our own drums, the kids make their own drums, their own hand drums…and they paint their drums, and we do, every other week we have someone come in to teach them drum songs so they must know like six to eight drum songs. And they go around and do opening ceremonies for anybody that needs someone to do an opening ceremony. Like, if the elders have a meeting, they’ll ask us to come and do an opening ceremony like a preamble, like a prayer, so that’s what our group goes around and does. We showcase them at the language conference in Sault St. Marie. So they have an Annual Language Conference in Sault St. Marie, so I think there was five to six kids, and they did speeches in the language and it was so nice; I think it brought tears to a lot of people that day. I think the youngest was a 3-year-old. The 3-year-olds didn't speak, they did drumming, and then it was a 4-year-old, I think the youngest was 4 that spoke, maybe 4 or 5.

What is the role or purpose of education?

I think that’s the number one thing. You need your kids to be educated for them to succeed and to obtain a good job. There are all types of fields to go into, right? And with our kids, these ones that are being educated, immersed in the language, will have even more to offer once they go and they’re well educated. They’ll have their culture. They can come back to the people and help them because that’s what was lost. Lots of things are not taught in the school system like history, what actually happened. So I think that needs to be opened up more, like what actually happened, like our history, what we lost, our culture, and how we’re bringing it back. That’s our history, and I think that’s very important for the kids to know and to grow up with. I feel more people are going back, want to go back to understand what they missed and what’s not there for them…

When I was growing up, for example, I think our religion was already changed over when I was growing up, because I remember having my first communion here. I don’t ever remember my parents praying like smudging and that’s what they said the Anishinaabe do, they pray to the Creator and all that. I’ve never seen that at home; as far as I remember they were chasing us to church, so it was probably just at that age where the changeover was happening and we lost all that religion part. And as I was growing up when I brought my family up, of course when we first taught them about spirituality we taught them about the church ‘cause that’s all I know. And gradually as the years went by, I would take on a little bit, like smudging. How do I smudge, how do we smudge? You can’t just jump in there right away, not knowing and respecting all the medicines there is, ‘cause there’s some good and some bad but you need to know how to smudge and stuff like this, just gradually learning how to smudge so that’s one example.

What are some of the areas of improvement for your community?

One of our big things, too, is the abuse of alcohol and drugs and stuff like that. That’s a big thing going on now. How to improve that, I don’t know. One of the things was when we did have that confirmation group because the kids were at that prime age. What if they started to take some more or at that age they’re going to want to take some because of peer pressure and stuff? So we worked with the health center and they had two workers, one happened to be my son, I said, “What if you do a presentation for the kids here about drugs,” like the effects of it, what it does to you for brain development, what it does to you physically, what it does to your family. Just of all the drugs and the side effects and anything, if you could come and do a presentation and kind of scare the kids away from drugs. That might be a good time to grab them and if that’s the only time we have them here, that’s the time to come in and do your presentation, for half an hour. So the kids that day, some of them really liked that; for some of them that was one of their best items they said they had liked about the whole preparation we had was the session on drugs, so I was hoping that was a little impact on them. Probably about 14 kids at the most so that was one small way. 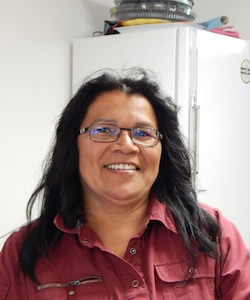