Tell me little bit about your professional career. How did you come to hold this position?

I am a lawyer for Javeriana University. During my first years of school and my secondary education, I was schooled within the Society of Jesus. I attended the Saint Bartholomew School, founded by the Society of Jesus in 1604, which was the first origin of the educational presence of the Society of Jesus both in Latin America and Colombia. I finished my high school studies there and then went to Javeriana to study law. When I finished my law studies 34 years ago, I was offered a job at the university in the legal branch. I accepted to work at Javeriana for a year. Thirty-four years later, I am still waiting for that year to come to an end.

Through my connection to the university, I accepted this first position as a university lawyer for about four or five years. A Jesuit at the time, who served as the highest authority at our school in Cali, asked me to come to La Javeriana in Cali. So, I finished at the Legal Department in Bogotá and went to Cali. There, I worked as secretary general of the Cali Branch, assistant to the vice rector, chief of personnel, for a short timed director of the general academics, and the highest authority of the vice rector. I worked for 13 years in Cali with the university. Then I was appointed academic vice rector in Javeriana Bogotá. I returned to Bogotá with my family and worked as a vice rector for six years. Later, I served as the advisor to the rector. Now, I’ve been the general secretary for eight years. That has been my career during these 34 years.

First, there are difference in the history and tradition. Javeriana University in Bogotá was founded in 1623. It functioned for about 140 years up until the Jesuits were expelled in the time of the desired extinction of the Society of Jesus. After about 170 years of closure, an act of restoration was signed after the Jesuits returned to Colombia. Thus, in 1930 the university was restored. That is why we speak of colonial Javeriana and contemporary Javeriana, which has been open from 1930 until today. The headquarters of the Javeriana in Cali opened in 1970, which poses the first major difference. The second difference is in the process of academic development. However, Javeriana in Cali and Javeriana in Bogotá are a single institution and share a mission, statutes, objectives, educational project, and most administrative policies.

Memory is a central theme of my study and is important for institutions like Javeriana which have such a long legacy and rich history. How has the legacy and work of Javeriana changed over the years?

University perception has changed over time. For example, from 1930 until 1970, Colombian higher education was primarily for those of a high socioeconomic class. Therefore, Javeriana was associated with the formation and training of individuals from the highest levels of society. Nowadays, this is not the case. People come from different conditions and areas of Colombian society. This has allowed access not only for elites or a small group of people but broader access for people from various levels of society. At this moment, the university is not seen as a university that forms elites. Rather, Javeriana is seen as a university with a mindset of pluralism. Elements of identity manifest in different ways to meet the needs of the society in which we exist today.

What role does Javeriana play in the city of Bogotá?

I believe that Javeriana has a role, fundamentally, not only in the city of Bogotá, but in the whole country. Javeriana has a vocation that is not just local but national in scope. It is viewed as one of the best universities in the country not merely for its academic quality but also its deep commitment to society. Employers can see the social consciousness of our graduates. The research done by the Javeriana University supports this social commitment. I believe Javeriana is therefore recognized for this great sense of commitment to bettering the problems that persist in Colombian society.

In Bogotá, the vision is the same. This vision manifests in our work with marginalized communities and efforts to provide alternatives to those without resources. We are recognized for attempting to give voice to the realities of the city. Javeriana is an open campus where people can live and coexist. That is the reputation we have as a pluralistic university.

Colombia is very agrarian and a large part of society is conservative, so the pluralism of our university can be surprising given that it is a Catholic university of the Society of Jesus. I believe that the city of Bogotá and the country see the Javeriana University as a university of very high quality. The university is also viewed as very religious with a lot of social consciousness in its work, actions, and commitment to pluralism and diversity. 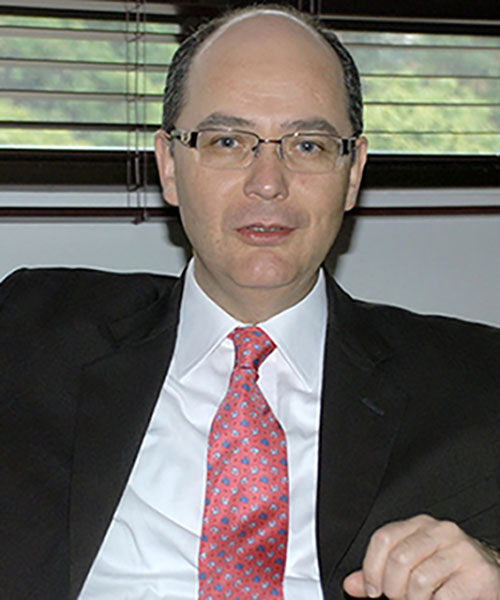