A Discussion with Edwin Barasa, Director of Programs for Africa Peace Forum in Nairobi, Kenya

Background: As part of the Religion, Conflict, and Peacebuilding Fellowship, Consuelo Amat interviewed Edwin Barasa, director of programs for the Africa Peace Forum (APFO) in Nairobi, Kenya. In the interview, Barasa describes Africa Peace Forum’s work and the great challenges that Kenya faces today. He also gives his thoughts on the proposed constitution, the current debate over the qadi courts and the abortion clause, as well as the role of the church.

Mr. Barasa, could you elaborate on the origins and work of Africa Peace Forum?

Africa Peace Forum has a diplomacy background, as former Ambassador Bethuel Kiplagat founded it [Kiplagat is now chairman of the Truth, Justice and Reconciliation Commission of Kenya]. In its beginning in 1992 it was a loose groups of diplomats with links to the government. APFO became a registered NGO in 1999, and by this time it had forged many important partnerships in and out of the government. The purpose was to bring intellectuals together to make up an international research group that had policy relevance. They formed the International Resource Group, which provided regional peace and security policy advice to decision-makers.

The post-elections violence in 2007 and 2008 served as the impetus to create programs with a focus on Kenya. We have produced several reports on Kenya’s sources of instability, including “Citizens Voice on Electoral Reforms” and “Human Security Architecture.” These reports shape our programs and provide policy recommendations to various actors. We take our reports and have one-to-one meetings with policymakers in an effort to effect policy change in a diplomatic way at the highest level of governance.

Could you tell about the various programs at APFO?

First, there is the [Information and Communications Technology] and Governance project, which is an attempt to enhance citizen participation in the post-conflict reconstruction and the implementation of the Annan-facilitated National Accord. Through the mobile phone technology and internet (blog), APFO is encouraging people to express their opinions and deliberate on issues of governance in Kenya, while we track the reform process by analyzing the radio, television stations, and other media to understand the media content and its relevance on the reforms process. The common person needs to be aware and take part in the transformation of Kenya if we are to prevent another tragedy.

The second project we have is the Conflict Early Warning and Early Response Mechanism, under the Inter Governmental Authority on Development (IGAD) framework. We have set up information centers across the country for information collection purposes. By tracking indicators such as desertification, regional development, environmental conditions, agriculture, price of arms and bullets—which is a combination of socioeconomic, environmental, and security measures—we make risk assessments that are informed by weekly communication to the headquarters by field monitors (FM) spread out in areas affected by pastoral conflict. The FM, with a conflict risk data set, develops a framework of action for each situation. We also put together peace meetings, dialogues, and work with the security machinery of the state to respond to incidents of violent conflict.

There are 20 FMs on the ground today. We are paying particular attention to the pastoralist communities in the Karamoja and Somali clusters, as those tend to be the most volatile. Any condition that puts pressure on resources, such as very dry or very wet weather, can easily destabilize the region. The meat market in Nairobi is very profitable, and that further complicates the situation: pastoralists sometimes own hundreds of cattle, but they refuse to sell them because it is reflective of their status. These regions have a very low level of development and education—with limited accessibility due to poor roads, few health and education facilities, and limited presence of the government administration. It is extremely challenging to work in such environments where the cultural differences are abysmal, and that reality has forced us to set more modest goals. Our goal is to prevent violence by addressing tensions before they escalate. This narrower objective is difficult because it is not wrong in that culture to kill an enemy who is armed. Disarmament is almost impossible, as it would require a mammoth effort from the state and regional interstate bodies such as IGAD and the International Conference on the Great Lakes Region, but at least the kind of violence is contained: it is taboo and unheard-of for pastoralists to kill women and children. The Catholic Church is in those regions trying to provide services and help develop in the absence of government. We partner with the National Steering Committee on Peacebuilding Secretariat to cover the entire country because this type of work has really paid off.

The third initiative is the Rapid Response Fund, which as the name suggests serves communities by allocating resources to avert a particular crisis. One example is when we channeled funds to Kibera, the Nairobi slum, for leaders of the community to organize dialogues between tenants and landlords to settle disputes over rent. There are a lot of difficulties with this program when it comes to donor conditions: the requirements are too stringent for programs that are supposed to be designed for quick assignment and delivery. We were unable to deliver the funds for a dialogue that was going to take place between Christians and Muslims in Mombasa in the run-up to the referendum on the proposed constitution, despite high tension being reported. The problem is that sometimes donors take a lot of time seeking justifications to grant support for situations that require urgent response. The bureaucratic bottlenecks involved can at times frustrate well-intended interventions.

Could you discuss the “big picture” obstacles that peacebuilding organizations face in Kenya? Talk about the issues and trends you have seen throughout the years.

One of our major difficulties as non-profit organizations is funding. We are dependent on foreign funding, and we have to downscale activities often to cope with the cash flow. U.S. funders are very issue-based, generally short-term oriented, and request very quantitative monitoring and evaluation. European donors focus more on long-term capacity and institution building, and they request assessments of what has changed and how we can attribute that to our work. In particular, Germans are noteworthy for developing long-term relationships.

Related to the issue of funding is the difficulty that comes with trying to define “theories of change” in proposals, but more importantly, in our work. Each party involved has something different in mind, and the theory of change is at times not well negotiated. Ideally we would all (donors, NGO, and the ultimate beneficiaries) sit down and negotiate on a theory of change that works, and the way that we will measure such a process. One great example is the work that missionaries have done in Turkana. They set up schools and made them voluntary. In the beginning very few people showed up because it was not part of their culture, and they did not see it as beneficial. Then, these few school attendees set the example for the whole community, shaped the schools, and helped to make them useful for the community. The schools have become much more popular now. This model requires flexibility and a long-term commitment.

But it would be ludicrous to think that funding and programming are to blame for our difficulty. Kenya has one major problem, and that is modern politics. In the pre-colonial era communities were much smaller, and the problems that bordering communities had were relatively minor. Councils of elders made communal decisions and solved conflicts. Colonialism was very destructive for Kenya, as it took advantage of ethnic setup, the existing loyalties, and people’s kindness. The British brought in the Nubians from Sudan to be the security agents of the colonial administration and effectively divided, ruled, and collected taxes. Some communities were befriended while others became resisters, leading to the resisters versus collaborators divide that played out during the war of independence. The Maasai and Kikuyus were especially mistreated during this period: they were pushed to reserves and made to work for the colonialists. This basically destroyed the way of life of Kikuyus because they were agriculturalists without fertile land. The Kikuyus started pockets of resistance (although they were also divided) to reclaim back land from whites, as the Maasai and Nandi were dying in masses because of polio and other diseases.

If I may jump all the way to the Cold War, this was also an era of great division in Africa. I think that the enmity between the Luos and Kikuyus is a consequence of the Cold War. Odinga, a Luo, worked to take Kenyatta, a Kikuyu, out of prison (the colonial administration had imprisoned him), and then when Kenyatta got out he sided with his own tribe. In the late 1970s, Kenyatta put Moi, a Kalenjin, in power as a temporary measure in response to political challenges at the time. The elite was handpicked, and Kenyatta became extremely rich—he was very inward-looking. This cronyism perpetuated the tribal mentality, and all the major ethnic groups became inward-looking, paving way for one of the major societal challenges that Kenya is facing today, i.e. ethnicity.

Given the history and remnants of colonial rule, and of neocolonialism, could you tell me what the West would ideally do to help rectify its act today? What is your ideal scenario?

I do not think that African countries are ready for compensation from the West, and we will only be ready when our institutions and structures are in place to be able to manage those resources for the good of the people. In the meantime, Africa would benefit from more developing world-friendly international rules. For instance, it would help to shape the United Nations Security Council so that five countries can no longer effectively veto resolutions while the rest of the world stands powerless. Cancelling all external debts would be good, too. Giving assistance to NGOs is wonderful so long as there are no ulterior motives that end up hampering the goals of development, peace, and justice.

Ultimately it is the job of Africans to improve our continent. Above all we need to decolonize our minds, and I am not sure if education is what can help us do that. Perhaps a more appropriate question is, what type of education can help us achieve a free mind? Our elites act like Westerners, and Africa refuses to think like one. We need to come to terms with what I call “the duality in the African mind.” We are very kind and forgiving, as in we have short memory of bad events. But, we pile up these bad feelings and have spells of violence that destroy the fabric of our society. 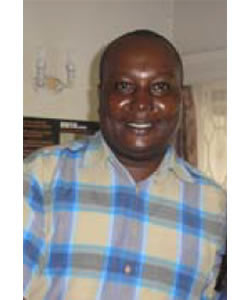