A Discussion with Enoé Texier, Central University of Venezuela

Background: As part of the International Higher Education Interfaith Leadership Forum, in August 2016 Melody Fox Ahmed conducted an interview with Enoé Texier, who is an anthropologist and social science professor at the Central University of Venezuela. Texier discussed her work with the United Religions Initiative, the challenges she's encountered in trying to build a culture of peace, and using the methodology of appreciative inquiry in interfaith dialogue work.

Please tell us about your current work/role, and in what capacity it influences/incorporates interfaith efforts?

I'm a professor at the Faculty of Economics and Social Sciences of the Central University of Venezuela and coordinator of the Community Service Unit at this Faculty. I am also an academic counselor for a project called Children in a World of Peace, where we train students to serve as facilitators of "Workshops for Learning and Practice Values ​​for Coexistence and Building Cultures of Peace.” They have to serve as facilitators for these workshops for children 7 to 12 years old, in schools, neighborhood associations, shelters, and other places. This educational program is conducted through the Luis Dolan Chair specializing in interfaith and intercultural studies to build peace, and it is attached to the same Faculty of Economics and Social Sciences. It also works with the United Religions Initiative (URI) Cooperation Circle for Dialogue from Venezuela, whose members come from different religious backgrounds and are thus able to teach different skills and talents. I have led this project since 2009, because I believe that the different faith traditions offer contributions to community development and education through values ​​that facilitate relationship processes and peaceful coexistence among community members, which is the main goal of this project.

I am the coordinator of the URI for Latin America and the Caribbean, which is a global grassroots interfaith network cultivating peace and justice to achieve the commitment of people willing to overcome religious and cultural differences and work together for the good of their communities and the world. URI implements its mission through local and global initiatives that strengthen the capacity of groups and member organizations to participate in different areas of community action, such as conflict resolution and reconciliation, planetary sustainability, education, programs for women and youth, and advocacy for human rights.

I define interfaith service as a commitment to intercultural harmony and peacebuilding work, going beyond religious differences to build bridges, and working together to address the big challenges we have facing our planet and the new generations. It is a co-creative adventure toward personal and world transformation.

In my view, there are some human qualities that are essential for interfaith service work, such as the ability to function in teams, appreciate the essence of others, reconcile and respect the dignity of people, listen and put the common goal before self-interest, value cultural differences to build bridges and make friends with diverse people, communicate to maintain group cohesion, and form close relationships of affection and shared commitment.

I want to share a story about the beginning of my interfaith footpath.

By 1997, I was researching in new paradigms of science, and I was interested in dialogue between science and spirituality. I used to work with Dr. Elaine de Beauport, an American scientist and author of Three Faces of Mind (1996), which is based on her own theory of multiple intelligences. I teach her theory and methodology concerning the development of our 10 intelligences at Central University of Venezuela to undergraduate and postgraduate students.

Those meetings with my mentor were always nutritious conversations for my investigation and soul. One of those days, while we were talking, she picked up the phone and dialed a number, and I heard her say “Dear Luis, I am going to introduce you to someone that I am sure you are going to do important things with.” Her friend on the phone was Father Luis Dolan, a Passions Catholic priest who was the co-creator of URI, who eventually became responsible for opening the interfaith path in my life. My mentor had created the Temple of Understanding in New York with Father Dolan and others.

Three months after that call, Father Dolan came to Venezuela, and one year later, in 1998, we organized a regional assembly in Caracas with Charles Gibbs, the executive director of URI at the time. It was held at Simon Bolivar University and Central University of Venezuela. We gathered 76 spiritual leaders from all over the world, envisioning the interfaith dialogue in the future. I have been working in interfaith dialogue ever since.

In 2001, we created the Luis Dolan Chair for Interreligious and Intercultural Studies for Peace (in his memory) at the Central University of Venezuela. We have being functioning for 15 years, and I am still coordinating it with an academic committee. Our main program is the service project Children in a World of Peace. Over time, interfaith service has become my occupation, because since 2012, I have been the URI regional coordinator for Latin America and the Caribbean. Additionally, one of my topics of research at the university is the area of neuroscience applied to studies of human spirituality, and the channels of communication between cultural and religious diversity.

I think that education in values, attitudes, and behaviors for sowing healthy coexistence and harmonious interfaith and intercultural relationships between human beings is a priority. So for me, one of the roles that higher education institutions should play in multicultural societies where different cultures and faiths live together is to teach how to cultivate healthy relationships that value and appreciate diversity. One of my present dreams is to dedicate my 2017 sabbatical year to focusing my research on deepening the topic of interfaith and intercultural studies in order to produce the academic design for a postgraduate diploma course in interreligious and intercultural studies for peace. Another focus will be to produce a document with the theoretical basis and scientific validation for the inclusion of the Luis Dolan Chair for Interfaith and Intercultural Studies for Peace into the UNITWIN program in UNESCO.

What kinds of support have you received—from your government, friends and family, institutions, organizations—in pursuing interfaith service related work?

I have had the full support of the Central University of Venezuela since the first URI Regional Assembly in 1998. Even if our universities in Venezuela have some difficulties right now, the Luis Dolan Chair has been functioning uninterruptedly since 2001, offering activities related to the following subjects: interfaith and multicultural relationships, the role of spirituality in our daily life as the basis of transcendence, and self-development through managing our brain and intelligence to improve our quality of life.

Also, for more than a decade, professors’ volunteer work has been crucial. We also have the vital support of the URI Cooperation Circle of Dialogue in Venezuela.

First, promoting interfaith and intercultural dialogue and a culture of peace was hard work 18 years ago. Few people believed or understood what it was. It was a challenge to open this dialogue at the Central University of Venezuela, which is the oldest university in the country, but we have done so, also creating the Louis Dolan Chair; and we have kept them both running. Second, it is also sometimes difficult to maintain the continuity and the cohesion of the formal members of any group. The URI Cooperation Circle for Dialogue of Venezuela has had representatives from diverse spiritual traditions volunteering since 2001, including Catholics, Presbyterians, Anglicans, Baha'is, Brahma Kumaris, Buddhists, Daoists, Jewish people, Mahikaris, and people who hold indigenous cosmovisons. There are also artists and scientists in the group dedicated to a culture to of peace. It has also been challenging to support and promote the visibility of this interreligious group and integrate indigenous cultures and societies, who have a different way of relating to living beings and the earth and may hold a different vision of approaches to ending violence and bringing peace.

In my work, I enjoy forming connections with people from different countries, languages, cultures, and faiths. It is something that comes with my personality, because I love and appreciate diversity in humans and living beings. I am convinced of the power of unity in diversity and the effectiveness of teamwork in reaching common goals.

I dream of ending the difficult situation that we have had in Venezuela for more than a decade economically, politically, and socially, which is linked to violence and insecurity for many reasons. It has encouraged the departure of families, friends, and also potential sponsors.

I would like the general situation in my country to change, and I hope that meanwhile, political issues don't contaminate interreligious dialogue.

I would like to share the methodology of appreciative inquiry to constructively engage spiritual leaders coming from different faiths and diverse social contexts: business, civil society, and government. 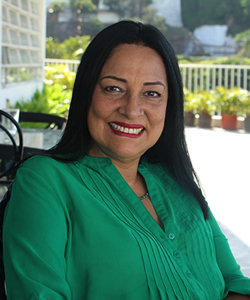