Tell me a little bit about your professional career. How did you come to hold this position?

I am a Jesuit, and I am trained in political philosophy. I started working at the Javeriana University in the Philosophy Department. Then, for five years I was the director of the Philosophy Program in the Academic Vice Rectory. I was appointed dean in 2016 and have held the position for two years. I have also worked as a Jesuit in two areas: the Jesuit Peace Program and the training of other Jesuits.

Can you tell me more about the School of Political Science? What types of programs do you offer, and how many students are in the school?

This school is the School of Political Science and International Relations. We have international relations master’s programs in international studies and Latin American studies. For political science, we have master’s degrees in government and territorial management, peace studies and conflict resolution, political marketing, public opinion, and social policy. We also offer undergraduate majors and minors.

Political science is not really a religious discipline. However, are there ways in which Jesuit identity and service are part of the curriculum in the School of Political Science and International Relations?

There are 34 Jesuit decrees that pertain specifically to universities. These universities are definitely Jesuit, and the formative tradition of the Society of Jesus plays an important role. This manifests in the maintenance of strong schools for philosophy, theology, and social science. Here, our focus is on political science. In particular, our focus is much more qualitative as opposed to a quantitative society. It has to do with working in communities and social participation.

For me, the link is not direct. However, I think there is a Jesuit inspiration or a way of understanding education. Education is about placing individual formation at the center. In recent years, the university has pushed for promotion of justice and peace through Ignatian spirituality. This all stems from the orientation of the Society of Jesus.

The dean of the School of Political Science and International Relations is a Jesuit. Thus, the Jesuit identity and the ways of the Society of Jesus are more naturally present. The university environment has two parts. There is the availability of services such as the sports center, psychological center, and the cultural programs. These are programs in which students can chose to participate. The schools can aid in this process. The more difficult and ambitious part is the idea that the whole university should exist under this formative framework. This should create coherence in how decisions are made, how students interact with teachers, and how community is created. To this end, there is always dialogue. Open communication is important.

The ideal is integral formation, care of the whole person, inspiration, and open transcendence. In concrete form, this ideal manifests as activities and workshops. We as a school do not run own activities. Rather, we are already a part of programs in the field and through research that seek to address many problems in society. This is how the university environment functions.

As a Jesuit dean, can you tell me a little about the history and presence of the Jesuits in Javeriana? What role do Jesuit professors or administrative staff play at the university?

Today, there are fewer Jesuits as the university becomes larger and more diverse. It is not always easy for students to meet a Jesuit. Two of the 18 deans are Jesuits: the dean of theology and myself. Three of the five vice rectors are Jesuits; the vice rector of academics and the vice rector of administration are non-Jesuits. The university is led by both Jesuits and lay people. I don’t think it is the presence of Jesuits, strictly speaking, that is the most important. Rather, what is most important is the values that Jesuits care for and promote including the coherence and consciousness of the university’s mission.

I believe that non-Jesuits of high academic achievement, deep social commitment or faith, can carry out this mission. We are about 30 Jesuits among a group of 30,000 people. I think the question for the Jesuits is how to be present and aid in orienting work toward the mission. The rector provides guidelines and opens the university outward, but in daily life he has little effect on the various areas of work. So, the question is: How can we utilize and learn from the method of the Jesuits?

What is the difference between Javeriana and other institutions in Bogotá? 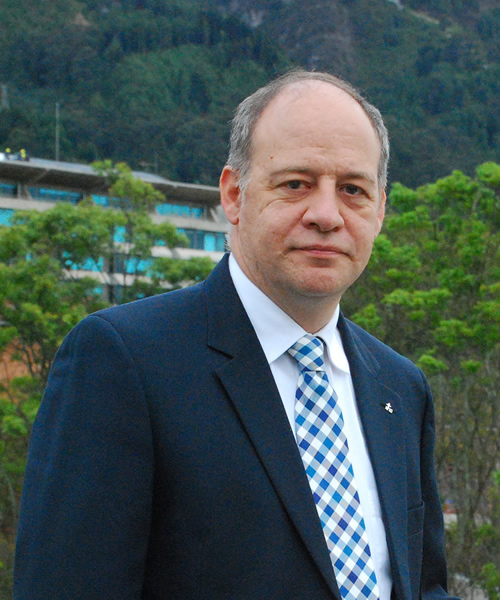