A Discussion with Peter Maruga, Coordinator of Peacemaking, Healing and Reconciliation Program for Nairobi Peace Initiative in Nairobi, Kenya

Background: As part of the Religion, Conflict, and Peacebuilding Fellowship, Consuelo Amat interviewed Maruga Peter, coordinator of Peacemaking, Healing and Reconciliation Program for Nairobi Peace Initiative (NPI) in Nairobi. In the interview, Maruga described NPI’s peacebuilding efforts, the major obstacles to their work, the funding issues that Kenyan peace and justice organizations face, the relationship between the church, NGOs, and the government, and his perspective on the constitutional referendum.

Mr. Maruga, could you please first tell me about your background and how you came to work for the Nairobi Peace Initiative?

I studied philosophy, political science, and international affairs in South Africa, but I am Kenyan. I have always been interested in peace and justice issues, and wanted to work for an organization that worked on these topics from a more academic standpoint. Founded in 1984, Nairobi Peace Initiative-Africa was one of the first peace organizations in the region. It was formed with the purpose of helping the region emerge from armed conflict, as well as to prevent the recurrence of violence. As a “peace resource” organization, NPI-Arica engages the community at a grassroots level, forges ties to academic, non-governmental and government institutions, and shapes the public policy discourse. I was drawn to this kind of work and find that there is great need for the work that we do.

How does the Nairobi Peace Initiative fund its activities?

We get most of our funding from religious organizations, especially the Mennonites, as well as from international agencies and foreign governments. In terms of foreign governments, the Nordic countries are especially generous. However, we try to veer away from government funding, as it can have too many strings attached. Religious organizations, especially the National Council of Churches, are our partners on the ground as well. Given that they are even present in the most remote areas of the Great Lakes region, our programs are able to reach those most in need. With regards to funding from communities of other faiths, there is very little of that. The Arab League usually channels its money to Muslim organizations and the programs are mostly apolitical: scholarships for engineers, doctors, etc.

Could you tell me the advantages and disadvantages of your funding sources?

Simply put, the work of most peacebuilding organizations in Kenya would not be possible without foreign donors, especially the Nordic countries, other EU nations, the U.S., and foundations. We are very grateful for their partnership. That said there is some tension that arises from receiving money from the developed world. First, the remnants of colonialism make us wary and sensitive of the influence that foreigners still have in Kenya, and today this plays out in the myriad restrictions and requirements attached to aid. Among these requirements is the automatic acceptance of UN covenants without a sovereign governmental process and public deliberation. Second, it is unfortunate how a lot of the funding that comes from abroad is intended for short-term projects, which demand immediate results. We all know that peace takes time and progress is extremely hard to measure, but few are willing to make that long-term investment. Third, we have a hard time covering essential operation costs, such as salaries, rent and electricity, as donors wish to allocate their money for programs.

On the other hand, it is also true that we have improved our work thanks to the scrutiny and competition that involves foreign money. As aid recipients, we have had to develop systems of monitoring and evaluation, financial transparency, and overall accountability. These improvements have made us more efficient and better at our jobs.

Can you tell me about NPI-Africa’s work? Specifically, could you elaborate on any efforts around the 2007/08 presidential elections and next month’s constitutional referendum?

As I mentioned before, NPI-Africa is a regional organization and we are based in Nairobi because of the strategic location. However, we have more recently engaged on issues pertaining to Kenya, and it is worth explaining why that is the case. The post-elections violence of 2007/08 played a major role in changing the relationship between the government and non-governmental organizations in this country. Prior to the chaos that ensued in late 2007, the Kenyan government viewed peace and development non-governmental organizations with suspicion, and as a threat to their authority. The fear was that NGOs were replacing the state. Indeed, it is widely known that the church is present and providing basic services in areas where the government is absent (particularly in northern Kenya.) The antagonistic relationship between state and non-state actors occurred in tandem with the international community’s growing consensus that their funds were best channeled to the people directly. The goal was to bypass corrupt and inefficient bureaucracies, and money started flowing to NGOs and faith groups. I must say that this is beginning to change, as members of the EU, for instance, are channeling more funding to public institutions because of the understanding that ultimately it is state capacity which needs to improve in order to achieve long-term sustainable development at a national level.

My perspective is that the post-electoral chaos forced politicians to realize that the state needs the help of these private actors: houses were burning, people were killing each other, basic services were shut down, and the government could use all the help it could get. This realization was reinforced by the power-sharing agreement that Kofi Annan helped broker. The four-point agenda, which spells the cease-fire agreement, recalls the various areas where non-state actors can/should play a role in preventing conflict in Kenya. This paved for a period of improved relationships between the state and NGOs, which is still enjoyed today. Unfortunately, this relationship may be deteriorating again and the reason is the strong partisan position that faith organizations are taking vis-à-vis the proposed constitution. Many church groups are carrying out civic education campaigns and preaching against the referendum, which is widely supported by the present government.

But, truth be told, members of the clergy, congregations, and NGOs have been political for a much longer period of time: some supported one of the two main parties during the contested 2007 elections (Mwai Kibaki PNU with and Raila Odinga with ODM). One of the consequences of partisanship, and of the blurring of the line between church and state, is that funding from the U.S. government and the European Union is becoming more difficult to attain.

What are the gaps in peacebuilding efforts in Kenya?

There are four main areas that need serious work in Kenya. First, there is ample need for capacity building, and the current constitutional debate is the perfect illustration. The poor level of education of the average person in Kenya, and even of many pastors, facilitates demagoguery and perpetuates unproductive discourse. For the sake of our democracy and to prevent another violent episode in this country, we need minimally informed citizens who are capable of making their own decisions. Today, people don’t take time to study the proposed constitution and vote based on what others say. This complacency perpetuates the culture of impunity and tribal misconceptions.

The second problem that peacemakers face in Kenya has to do with funding, and it goes far beyond their scarcity. There is a lack of cohesion between funders and NGOs, competing missions and ideologies, redundancy in some areas and a lack of attention in others, and an overall absence of direction. For instance, there are significant ideological differences between the World Bank and UNDP that we are forced to reconcile when applying to grants in both organizations. Given that we have to shape our work to meet donors’ requests, this disorganization affects our ability to craft comprehensive and coherent plans.

The third issue that Kenya is facing today is how to manage reform. Assuming that the proposed constitution passes, the transition is going to be an incredibly complicated, controversial, costly and slow process. There is going to be vetting of politicians, new appointments, creating new organisms, etc. I am not sure how Kenya can handle that massive transformation.

The fourth and final problem that we are facing is mistrust. There is a very serious lack of trust even within peace organizations, and it takes on tribal, religious and political dimensions. We have to work together to prevent political violence, but the divisions are alive and well.

Can you tell me about how NPI’s peacebuilding efforts fit into this framework of gaps in the field and problems in Kenya?

NPI-Africa has been spearheading interfaith dialogue between Protestants, Catholics, and Muslims for many years. We bring Clerics together to discuss contentious issues, and even if nothing else is achieved, at least they come out with an understanding of each other’s positions.

An example of this kind of work is when we facilitated the coming of Imam Ashafa and Pastor James to speak after the screening of their film in Kenya. Their discussion set the stage for a profound and fruitful discussion between Christians and Muslims that day.

In addition, we also have what we call “peace committees” in various parts of the Great Lakes Region, which set up early-warning systems, monitor high risk areas, and provide dialogue services for the community.

Finally, NPI-Africa does not have a position of the proposed constitution, but we are partnering with many other NGOs in Kenya to promote a civil debate, mutual understanding, and a peaceful referendum. 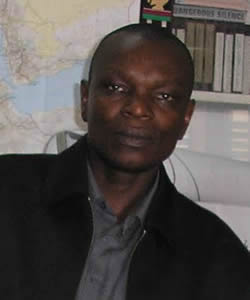