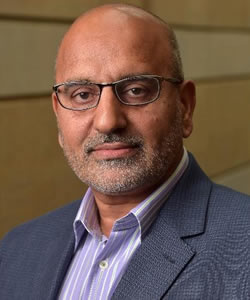 Ebrahim Moosa is professor of Islamic studies at the University of Notre Dame, with appointments in the Department of History and the Kroc Institute for International Studies in the Keough School of Global Affairs. He co-directs, with Scott Appleby and Atalia Omer, the Contending Modernities project. His research and teaching span both classical and modern Islamic thought, with a special focus on Islamic law, history, ethics, and theology. He was a professor of religious and Islamic studies at Duke University from 2001 to 2014; Moosa previously taught at the University of Capetown and Stanford University and was named Carnegie Scholar in 2005. His publications include What is a Madrasa? (2015), The African Renaissance and the Afro-Arab Spring: A Season of Rebirth? (2015, edited with Charles Villa-Vicencio and Erik Doxtader), Ghazali and the Poetics of Imagination (2005), and Fazlur Rahman's Revival and Reform in Islam (2000, ed.). Before entering academia Moosa worked as a journalist in South Africa and the United Kingdom. He earned his M.A. and Ph.D. from the University of Cape Town.