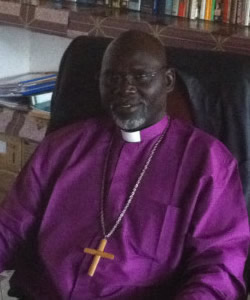 Bishop Arkanjelo Wani Lemi is pastor of the African Inland Church of Yei, Sudan and previously served as General Secretary of the African Inland Church for four years. During 2010-11 he served with the South Sudan Religious Leaders Referendum Initiative to promote a peaceful, informed, and fair voting process on independence. Wani Lemi was born in Kapoeta, Sudan in Eastern Equatoria at the end of the first Sudanese Civil War. During the second Sudanese Civil War he worked with Norwegian Church Aid, which sent him to Nairobi in 1988 for management training. He remained there as a refugee until 1994, when he began work with Across. In 1997, Arkanjelo received a fellowship to complete his Master of Arts in Practical Theology in South Korea.