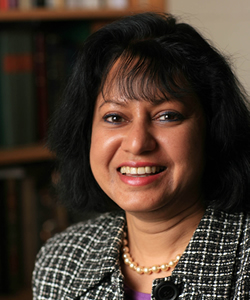 Asma Afsaruddin is a professor in the Department of Near Eastern Languages and Cultures at Indiana University, Bloomington. She specializes in the religious and political thought of Islam, Qur’an and hadith, Islamic intellectual history, and gender. In addition to numerous articles, her books include Contemporary Issues in Islam (2015); Striving in the Path of God: Jihad and Martyrdom in Islamic Thought and Praxis (2013); Islam, the State and Political Authority: Medieval Issues and Modern Concerns (2011); and The First Muslims: History and Memory (2008). Afsaruddin is a member of the academic council of Georgetown's Prince Alwaleed Bin Talal Center for Muslim-Christian Understanding and of the American Academy of Liberal Education's board of trustees. She has received research funding from the Harry Frank Guggenheim Foundation and Carnegie Corporation of New York, which named her a Carnegie Scholar in 2005. Afsaruddin earned her Ph.D. at Johns Hopkins University and previously taught at the University of Notre Dame and Harvard University.