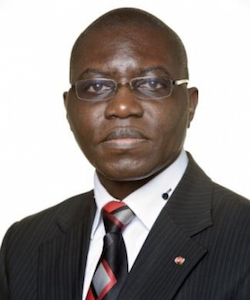 Charles-Armel Doubane is the Central African Republic’s Minister of Foreign Affairs, appointed by President Faustin-Archange Touadera in April 2016. He served previously in several government positions including Minister of Education (2006 to 2008) and Permanent Representative to the United Nations (2011 to 2013). He was a candidate for president in the 2015 elections. In his current position, he has been a central figure in peace negotiations in his troubled country. Born in Zemio, in southeastern CAR in 1966, he was educated in the CAR and at the French Ecole Nationale d’Administration, the Hague Academy of International Law, and of the University of Paris XI (DEA in Public Law) and earned his Ph.D. in diplomacy and international relations from Euclid University. He is the author of Ma Vie, Ma Vision pour le Centrafrique.