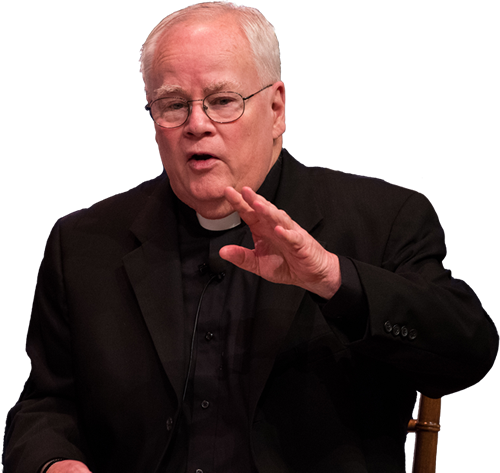 The Role of Religion in Eradicating Modern Slavery

On February 25, 2022, Senior Fellow Rev. David Hollenbach, S.J., spoke on "The Church and Modern Slavery: Responding with Strength and Humility" at a conference hosted by the Pontifical Gregorian University. See the session two video between minutes 10 and 35 for his keynote.

Our Obligations to History in 2022

Before coming to Georgetown he was the director of the Center for Human Rights and International Justice at Boston College, where he held the University Chair in Human Rights and International Justice. He has also taught at the Jesuit Philosophy Institute in Ho Chi Minh City, Vietnam, and at the East Asian Pastoral Institute in Manila, Philippines. He has conducted workshops for parliamentarians and for church leaders in South Sudan on human rights in their newly independent country.

He is the past president of the Catholic Theological Society of America and the Society of Christian Ethics. He assisted the United States Conference of Catholic Bishops in drafting their 1986 pastoral letter Economic Justice for All: Catholic Social Teaching and the U.S. Economy. His awards include the Civitas Dei Medal from Villanova University and the Marianist Award from the University of Dayton for Catholic contributions to intellectual life. He received the John Courtney Murray Award for outstanding contributions to theology from the Catholic Theological Society of America, as well as a number of honorary degrees.

Rev. Hollenbach obtained his Ph.D. from Yale University and his B.S. from St. Joseph’s University; he also earned his M.A. and Ph.L. degrees from St. Louis University. He entered the Society of Jesus in 1964 and was ordained a priest in 1971.