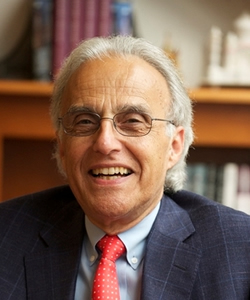 John L. Esposito is a University Professor, professor of religion and international affairs, professor of Islamic studies, and the founding director of the Prince Alwaleed bin Talal Center for Muslim-Christian Understanding at Georgetown University. He served as president of the Middle East Studies Association of North America and the American Council for the Study of Islamic Societies; he is currently a member of the High Level Group of the U.N. Alliance of Civilizations, a body of 20 international leaders that guides the alliance's work. He has written over 30 books, including Islamophobia: The Challenges of Pluralism in the 21st Century (2011, with Ibrahim Kalin), Who Speaks for Islam? (2007, with Dalia Mogahed), Islam: The Straight Path (2004), and Unholy War: Terror in the Name of Islam (2002). Esposito received the American Academy of Religion’s 2005 Martin E. Marty Award for the Public Understanding of Religion.