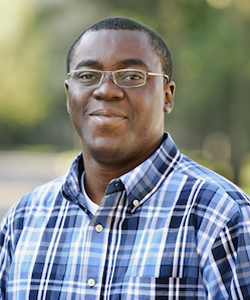 Omobolaji Olarinmoye is a Visiting Assistant Professor of Government in the Department of Government at Hamilton College. His areas of specialization include comparative and African politics; Nigerian politics; development studies; and peacekeeping and post-conflict peace-building. Dr. Olarinmoye was a postdoctoral Global Leaders Fellow at Oxford University (2011) and Princeton University (2012), a Cadbury Fellow at the Centre of West African Studies, University of Birmingham, and a Programme on Ethnic and Federal Studies doctoral fellow at the Department of Political Science, University of Ibadan. He has also held positions with the South-South Research Exchange Programme on History of Development and CODESRIA. Olarinmoye holds a doctorate in Political Science (Comparative Politics) from the University of Ibadan, an M. Phil/D.E.A in African Politics from the Institut D’Etudes Politique/Centre D’Etudes d’Afrique Noire, Bordeaux, and an M.sc and B.sc in Political Science from University of Ibadan.