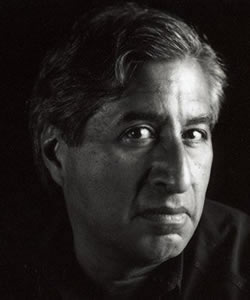 Richard Rodriguez is an author and a journalist, both in print and on television. As an author, he is most widely known for his autobiographical trilogy on class, ethnicity, and race: Hunger of Memory: The Education of Richard Rodriguez (1982), Days of Obligation: An Argument With My Mexican Father (1992), and Brown: The Last Discovery of America (2002). His most recent book, Darling: A Spiritual Autobiography (2013), is about the Abrahamic religions after September 11th and the desert ecology. Rodriguez worked as an essayist for nearly twenty years on the PBS NewsHour and has written documentaries for British and American television. He has written for newspapers and magazines in Europe and the United States; he was, for a time, a contributing editor for Harper's Magazine and the Los Angeles Times. Rodriguez holds a B.A. from Stanford University, M.S. from Columbia University, and Ph.D. from the University of California, Berkeley.