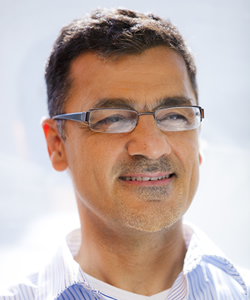 Salam Al-Marayati is president and co-founder of the Muslim Public Affairs Council. He is a expert on Islam in the West, Muslim reform movements, human rights, democracy, national security, and Middle East politics; he has spoken on Islamic and interfaith issues, as well as democracy, human rights, and conflict in the Middle East, Balkans, and Transcaucasia, and testified before the U.S. House of Representatives Committee on Homeland Security. Al-Marayati has published articles and interviews in the Wall Street Journal, Los Angeles Times, Christian Science Monitor, Chicago Tribune, and USA Today, and has made media appearances on the Dennis Miller Show, Tonight with Deborah Norville, Politically Incorrect, and C-SPAN and NBC. Al-Marayati is also an adjunct faculty member at Bayan Claremont and a board member of the Muslim Reform Institute. He was co-chair of the Interfaith Coalition to Heal Los Angeles, which formed in the wake of the 1992 Los Angeles riots.