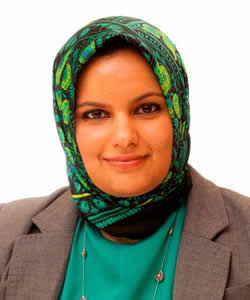 Sohaira Siddiqui is an assistant professor of theology at Georgetown University in Qatar. Her research interests include classical Islamic legal theory (usul ul-fiqh) and political thought, the development and intersection of legal thought and political thought from the ninth to eleventh centuries, and secularism and modernity in relation to Islamic law and Muslims in the West. Siddiqui also taught a class supported through the Berkley Center's Doyle Seminars project. She is currently working on a book and several shorter projects focusing on the legal and political thought of the eleventh century jurist and theologian Abu Maʿali ai-Juwayni. She is also working on a translation of one of his shorter legal treatises and editing Locating the Shari'a: Legal Fluidity in Theory, History and Practice (forthcoming). She has previously taught Islam, Islamic law, gender and the modern Muslim world at the University of Saskatchewan, Canada. She received her doctorate in religious studies from the University of California Santa Barbara.