A Breath of Fresh Air Halted by COVID-19 and Racism 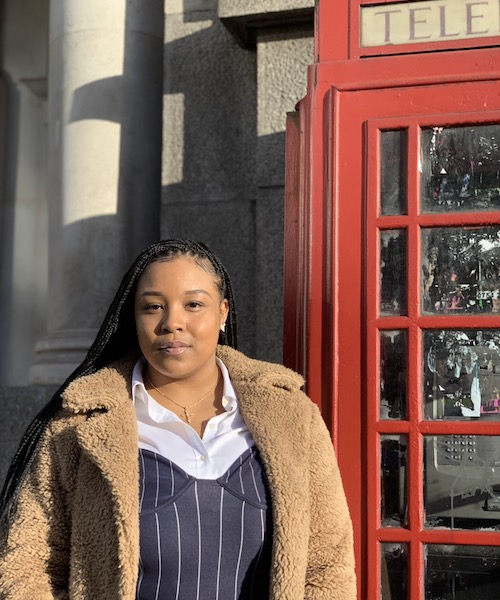 As soon as I received the email that my study abroad program in London would be canceled due to COVID-19, my heart immediately sank. Here I was, finally immersing myself in a place outside of Georgetown. I had been so excited to study at a school, the University of London’s School of Oriental and African Studies (SOAS), that is rich in diversity, from the student body to the faculty to the curriculum.

At Georgetown, I found myself in the infamous Hilltop bubble, with my identity and success wrapped up in the activities I do at Georgetown. Everything about Briana had conformed to being a passionate and tenacious advocate for underrepresented groups and the Black community at Georgetown. I was extremely drained—from academics, campus jobs, and being an active advocate and leader in the community.

I thought studying abroad would be a welcome relief. And for a few weeks, it was. It was honestly the breath of fresh air that I needed. I journaled more often, listened to music, connected with myself, and started to make new friends. I traveled to Paris, Madrid, and Rome before the program got canceled and had planned trips to Morocco, Cairo, Cyprus, Brussels, and Barcelona. I was exploring student activism at SOAS and how British, U.S., and global politics infiltrate the campus. I was navigating class structure and unfamiliar, unwritten rules and expectations. I was observing race relations in Britain and how I was treated as an African-American woman. At least I was until early February, when the teachers at SOAS went on strike.

Watching the strike unfold gave me a wider perspective on how higher education and ethics are navigated and mediated throughout the United Kingdom—and a different take on student activism. Faculty took serious collective action because of discrepancies in teacher pay and resources throughout the UK, at over 70 universities. Many of my teachers emailed me explaining their stance on the issue and vocalized their passion for striking. Moreover, the school’s student union stood in solidarity with their professors. The gravity of the strike and the response to it has shown me that they really uphold the values of integrity, solidarity, and protest—which I do not find to be very common at Georgetown or in the realm of the university in general in the United States.

Although there is a plethora of organizing that occurs on campuses across the United States, I do not feel that administrations or student bodies currently embrace protesting to the extent that I saw in the UK. I think it is reflective of the ways in which the United Kingdom's youth are really keen to protest and stand in solidarity against oppression and corruption, something I do not see very clearly currently in the United States, beyond minority and affinity groups fighting for their rights.

As it stood, classes at SOAS were canceled for four weeks, until March 16. Little did we know that this would not be the most or only disruptive experience to our time abroad. Nor would it be the only time when the theme of activism would be present in our daily lives.

When COVID-19 seemed initially to be a problem only in Asian countries, London was still very much open. I was shocked by the news that we would have to return back home. I remember vividly seeing tweets slowly reach London, as friends started to take precautionary actions to avoid contracting the virus, but it was still far away. In February, when it was clear that this was not going anywhere anytime soon, my friend sent a link to the most contaminated areas, which included the train station five minutes from my dorm.

I traveled with friends to Italy and Spain, just as Italy was seeing cases skyrocket. My family was very concerned and texted me so many times to remind me of the steps to take to ensure my safety. Honestly, it was nerve-wracking being in Italy when the virus was at its peak there. Then, we went to Madrid right before we were told to return to the United States. You could see the emptiness on the streets, stores and many of the tourist attractions that we planned to see closed because of COVID-19.

As I returned to campus because of housing circumstances back home in Brooklyn, New York, I did receive some unfortunate news that a family member had contracted coronavirus. Although they have recovered, I was incredibly sad to know that it had come so close to home. This started to make me very anxious, as I thought about loved ones and the chances of them catching the virus as well because some are essential workers. My mother and my great-aunt are both immuno-compromised; it was scary not knowing whether or not they had been exposed while I was away from home. Overall, being back has had its downfalls, but being close to family and friends has been a major relief during a time that has felt very isolating and uncertain.

As I continue to sit and reflect on the lasting effects that Black people are experiencing during this “double pandemic” of racism and COVID-19, my heart continues to ache and my anxiety continues to rise. As a Black woman, it has never been clearer or more evident that, in this country and globally, anti-Black racism has never been eradicated. But now the world is witnessing that reality on a heightened scale. This disease lives freely in the minds of millions of white people and other races; it is embedded and woven thoroughly into the systems that we encounter every single day in education, housing, food security, workplace environments, etc. And it lingers within the interactions between Black people and others. The Black Lives Matter movement, catapulted in 2013 and re-entering the conversations of millions in 2020, is a reminder that the value for Black lives, personhood, and culture is not a moment, but a movement that I, and many others, continuously fight for every day.