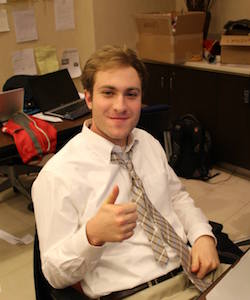 Rosh Hashanah marks one of the most important days in the Jewish calendar. It is the Jewish New Year, literally translating to “Head of the Year,” and is a festive celebration mixed with reflection. Even though I rarely went to synagogue growing up, I never missed the Rosh Hashanah service. So naturally, when I decided to spend my fall semester in France, I had to find somewhere to pray to welcome in the new year. Lucky for me, the Grand Synagogue of Lyon was a 10-minute walk from my house.

The synagogue rests in a nondescript, gray stone building on the bank of the Saône River, only distinguishable by the Star of David located in the top-most window. On the evening of Rosh Hashanah, my mother (who happened to be visiting) and I dressed in our best (which was an embarrassingly low bar in my case) and made our way to this hidden-in-plain-sight place of worship. Since the Grand Synagogue is Orthodox, my mother was required to sit upstairs with the rest of the women, while I sat in the main pews downstairs. As the other congregants filtered in, they gave each other hearty welcomes. This was clearly a small, close-knit community. They were of all ages, wearing everything from suits to jeans, and ranged from Reform to Orthodox in their practice of Judaism.

When the prayer service started, it was entirely in Hebrew and moved rapidly. I quickly felt lost in a service filled with unfamiliar melodies and prayers. Every time I thought I had caught the strand of a familiar prayer, it would change. When I thought the cantor would zig, he would zag. The siddur (prayer book) was entirely unhelpful, since they never indicated what page number they were on. When the rabbi delivered his sermon, I struggled to sort French words from Hebrew as they echoed into the vaulted ceiling.

At one point, though, they sang the Shema, a short prayer that functions as a declaration of faith in Judaism. Only two lines long, it is sung with reverence and passion. Hearing the Shema, thousands of miles from home, surrounded by strangers, in its same simple beauty, made the whole service come together for me. It reinforced the idea of a worldwide ability to find communities that share my traditions and religious heritage. While I did not understand or follow everything (or even most things) during the service, seeing the worship customs of French Orthodox Jews had value in itself.

The flip side of this global religious community is the constant threat posed to Jews around the world by the forces of anti-Semitism. Following the service, the congregation filed outside to the river to do tashlich, a symbolic casting off of sin to enter the new year that is marked by throwing pieces of bread into a body of water. What made this experience unnerving were the eight armed French soldiers and four policemen who blocked off the street while the congregation was outside. France is in a state of emergency, and Jews, a traditional target of terrorists, are considered a group at high risk. With Europe in a fearful state after a spate of terrorist attacks, even Rosh Hashanah has gained the feel of a protected convoy, threatened to be ambushed at any moment. Despite the threat, it was emboldening and welcoming to see these Jews come together to pray as their ancestors had done on the lunar New Year for thousands of years.