Abigail Clauhs (United States) on Global Effervescence: Why the Olympics Are The World's Flash Mob

In my studies, I have learned about sociologist Émile Durkheim's idea of “collective effervescence,” or the shared energy generated by a group of people. Collective effervesce is a home-team advantage. It is a flash mob dancing, a crowd doing the wave together. It is Carnival, New Year's Eve, the hearts of everyone pounding at the same moment. And, in an even more global way, it is the Olympics.

At the Olympics, the conflicts of the world are transcended as humanity comes together in worldwide effervescence. In 2011, all 193 nations of the UN adopted the Olympic Truce. Pledging to suspend all wars for the 2012 Olympic Games, they embodied the Olympic idea of sports serving a greater purpose of representing the world's values—the values belonging to us all.

Olympic values are universal and interconnected. Respect is extended to all people—a belief in equality, in human dignity. In the Games, this happens through a commitment to fair play. From respect comes peace, as friendships grow and international relations build harmony and inclusion. We see this through the embracing of the Paralympic Games, especially in London. The value of global consciousness makes us see the world as one planet, a whole instead of a map fractured by borders, and calls for stewardship of the earth. Every participating nation at the Olympics shares the same planet; the issues of climate change and urban renewal affect us all. The legacy of nature and the world we live in is one worth saving, and the Olympics remind us of that.

Yet there is a crucial step from ideal to reality, and it can only be reached through action. In the 21st century, the future is held in the hands of the young, who have created political and social change across the globe in recent years and will someday run the Olympics. It is important, then, to focus on young people, now ever more connected across countries by technology, and bring them together through Olympic values.

I propose creating Olympic Youth Conferences where representatives under age 25 would be chosen from each nation. To involve sports, education, and culture, each country's delegation would consist of three young people—an athlete, student, and artist, each reflecting the Olympic values of respect, peace, and global consciousness. At these conferences, workshops would teach delegates how to start and run sustainable initiatives in their own communities, from athletic to educational to creative programs. In participating, these delegates from different cultures would interact and build friendships, forming impressions to carry back to their own countries.

Returning home, delegates would be provided with grants to begin their initiatives. Through technology, they would communicate with their fellow international peers, sharing their struggles, successes, and advice with others from the conferences. It is a program that would create unity and one that would, even after the collective effervescence of the Olympic Games has faded until the next Games, continue and grow and spread into a global effervescence filled with joy, hope, and the excitement of a sudden flash mob. 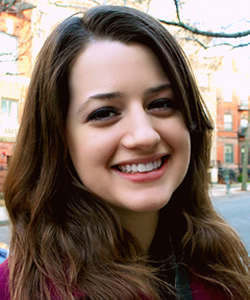 Abigail Clauhs graduated from Boston University in 2014 with a major in religion and a minor in English. She is completed her M.Div. at Claremont School of Theology, where she is focused on interfaith engagement and social justice. In spring and summer 2012 she was a Millennial Values Fellow and research assistant at the Berkley Center.