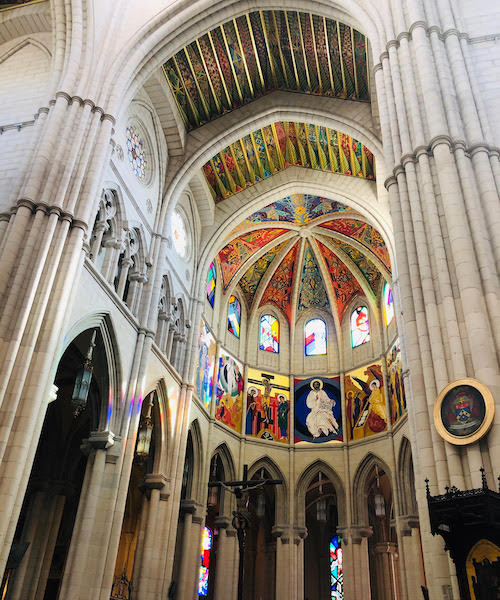 A few weeks ago, I visited La Catedral de la Almudena (the Almudena Cathedral) in Madrid. On its surface, it might seem like a typical enough sentence. Not so unusual to visit a cathedral when in Europe, and especially not in Spain, with its long history of Catholicism. But unlike most cathedrals in Europe, Almudena Cathedral was finished barely 30 years ago. And unlike what one might expect of a Jesuit university student studying in Spain, I am not a believer.

Aesthetically, the cathedral is cathedral enough. Built in traditional neo-Gothic fashion, it possesses all the elements that make for a grand cathedral: high, arching ceilings; colorful stained-glass windows; thick stone columns. Nonetheless, something about it feels very artificial and contrived, perhaps due to the unshakable fact that it lacks the history necessary to really command a sense of authority or legitimacy. Almudena Cathedral certainly lacks the pomp and prestige of the more popular cathedrals in Europe. It doesn’t boast any famed relics or claim any 500-year lineage. Perhaps the most damaging metric is its current position as number 63 on TripAdvisor’s list of “Things to Do in Madrid.”

Similarly, I always feel artificial when I explore places of religious significance. It is not uncommon to see people praying in the pews, and even if there are other crowds of tourists milling about, I always feel like an intruder. I can appreciate cathedrals for their beauty and for their history going back hundreds of years, but my appreciation never quite reaches the levels I feel it ought. There’s always the deeper meaning that I feel I’m missing, connections that I’ve never had the opportunity to make.

I did not grow up in a religious household in any sense, so making a personal decision regarding religion has never been a struggle. It’s been easy to decide I’m agnostic and move on with my life. However, part of me wishes I could understand and belong to whatever that deeper undercurrent is that I can feel but not truly experience when I visit cathedrals. Nonetheless, Catholicism has never really appealed to me. As someone who knows very little about religion, I have always associated intolerance and a certain rigidity with Catholicism. Without an inside perspective, all I have known of Catholicism is its record in terms of the people and identities it accepts. Particularly in Spain, it is hard to shake reminders of the Spanish Inquisition and the expulsion of Muslims and Jews when it comes to Catholicism. In general, religious institutions have never appealed to me because they seem to tout inherently exclusive concepts in which you either belong or you do not. Thus, like La Almudena, I’ve never felt very spiritually connected to anyone or anything.

Or so it would seem.

It’s all in the details. In La Almudena, the cathedral appears at first glance more modern than it is interesting. The stained-glass windows are more contemporary and pop art-inspired rather than the typical intricate panes depicting biblical scenes. However, if you look more closely, you notice writing along the walls not only in Greek but also in Arabic. “Almudena” derives from the Arabic al-mudayna, meaning “citadel,” a nod to the site of the ancient mosque that once stood where the cathedral now stands. Additionally, “Almudena” refers to the Virgen de la Almudena, a depiction of the Virgin Mary dating from medieval times. A Catholic religious icon bearing an Arabic name suggests the mix of religions and cultures that once existed in Spain due to Muslim occupation, a time that comprises a significant portion of Spanish history and still influences the Spanish language to this day.

The subtle ways in which La Almudena, as a Catholic cathedral, has harkened to other cultures and religions and the medieval origins of its namesake have surprised me. In the end, the construction of La Almudena cannot be easily categorized by a single description, but rather an eclectic mix of the modern and the ancient, the Spanish Catholic and Islamic. Perhaps La Almudena isn’t “artificial” but rather a new way of representing connections to religion. Just as La Almudena is different from cathedrals built hundreds of years ago, the way religion is interpreted in the modern age seems to be changing with newer generations. I think it’s becoming harder for tenets of religion and ideology to continue to be interpreted in old, rigidly regimented ways. It is no longer so easy to disentangle the intersections between religion and other ways in which people are categorized and I wonder how religion might change in the face of increasing globalization and interconnectedness.

I’ve never understood the need to be religious or religious beliefs in general. But for a moment, as I rested on a pew and looked up at the light filtering through the stained glass, I could understand. I thought about how people 500 years from now might come to visit La Almudena and marvel at its longevity and how they would speculate about what it represented for the society of its time.

La Almudena might not be old and historic yet, but give it a few hundred years. At least for now, La Almudena personally represents a door cracked slightly open into reflecting upon my beliefs about religion and the ways in which they should and could change. La Almudena seems to still be figuring out its place in Madrid’s history and its future. I am still figuring out the role religion will play in my own future—La Almudena lets me.