Appreciation of Black Culture versus Black Society in Australia 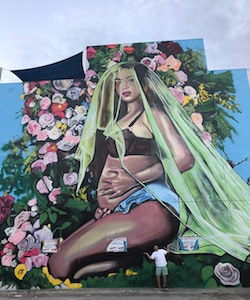 “Melbourne is really nice. It’s just REALLY white,” the man next to me told me as our plane was just landing in Melbourne, Australia. I hesitantly laughed with discomfort in realizing that all race-related experiences were about to change due to the lack of people of color present in Australia. I realized that I was no longer in Harlem, where people of color roamed freely and made up a large part of the population. Oddly enough, I wondered what the rhetoric around the black identity was; I wondered where they got their information about black people from, whether they would consider me black, and the ways that they felt about black culture.

My second day in Melbourne, I was informed of a Beyoncé mural celebrating her pregnancy with her two twins. Like a true member of the Beyhive, I eagerly went to the mural and took a picture (as you can see). It was in this moment though that I realized the attention and love that people had for black culture. Despite not having any ties to Beyoncé someone took it out of their day to create such an extensive mural within the city to celebrate her pregnancy. The celebration of this black woman surprised me, considering that so many of the people in Melbourne are white. Like America did in the past, Australia treated its Aboriginal people in a terrible manner; however, they currently celebrate black cultural ideas and icons like Beyoncé.

Later that same week, while at the Melbourne Welcome program, a pre-orientation program for exchange and study abroad students, we revisited the Beyoncé mural after having learned about Aboriginal people in Australian history. We went to a museum and learned about Aboriginal art, cultural artifacts, and the removal of Aboriginal bodies from Australian history. Aboriginal people were stripped of their land and persecuted simply for being Aboriginal. Learning about the harsh treatment of the black community present in Australia led me to question why the world seems to disregard the importance of black people, despite their continuous contribution to society and popular culture. Many communities, Australia included, continue to profit off of the work and cultural practices that are created by black bodies. They use their music and cultural dances for amusement, but never pay complete respect to the people who have enhanced the expansion of their country. This country and the United States do not appreciate the contribution that black people make into the culture. Instead they see black people as different and steer clear of them while worshiping and popularizing their culture and wanting to be something they are not.

Growing up in a Dominican family that had various aspects of internalized racism, this was something that I had seen growing up. I was taught to enjoy all the aspects of black culture, such as cultural dances like merengue and bachata, which were created through the slave trade. Yet, I was told not to value the contribution and societal worth of black people. The removal of the black bodies from history, the appropriation of ideas, and cruelty always seems to be present no matter the country.

So, as Amandala Stenberg said, “What if America [or Australia in this case] appreciated Black lives as much as they appreciated Black Culture?” This question will continue to unravel as I spend more time in Australia.  Getting different ideas, as I continue to hear sayings and music like Kanye West, Jay Z, and Rihanna, that stem from black culture, being celebrated by white bodies, but a sense of prejudice when actual black people are concerned.

I have only been in Australia one week and am in love with the culture, but I am still very interested in race relations and being critical of the ways in which black bodies are not appreciated for the role they play in society.