Like many other sub-Saharan African countries, Tanzania is a male-dominated society. Women are still considered inferior to males. Gender in equality is not only accepted but is also deeply ingrained within the culture. Females are seen as the homemakers and care takers whereas males’ sole duty is to earn an income. In most arenas of society men hold the power; from politics to the economy women barely have a say. With most women leaving school at earlier ages than men—and therefore getting less educated—many cannot participate in the lawmaking or change the cultural standards. Women being unaware of their rights and their lack of economic, educational, and political liberty fuels the patriarchal society.

From my weekly treks to the Kigamboni Community Center, every Thursday evening I have been able to gain insight about gender roles in Dar es Salaam. On one occasion, the students had a debate about whether love or money was more important. Stereotypically, the majority of the males answered money for reasons such as “to get a wife, ” “to support the family,” “because my mom and wife do not work or have jobs.” It was obvious that the boys felt the need to be the “breadwinner” and backbone of the family, but only when it came to finances; otherwise it was the woman’s job to “love and take care of the family and kids.” As long as the male attempted to fulfill his financial duties, no matter how meager his earnings or how many wives and kids he had, his responsibilities were met. Everything else was the responsibility of his wives and children to take care of.

The effects of a patriarchal society create a domino effect. It is seen in nearly all aspects of life, but especially in health care. Sexual and reproductive health services are mostly sought out by women. But with the male head of household ultimately making all the decisions, not all services can be used. There is a large unmet need for contraception. According to the World Bank, approximately 25.3 percent of married women in Tanzania ages 15 to 49 “do not want to become pregnant and are not using contraception.” Without having males involved, family planning and proper sexual and reproductive health is difficult to implement in this male dominated society. Early marriage and marital rape are not uncommon, especially in rural areas. Even when some women become educated about safer sex practices, without the consent of the male they cannot fulfill those needs. Extremely high fertility rates results in high infant mortality and maternal mortality rates as well. The irony is that women are responsible for not only themselves, but their children and entire families; however, they do not have control over their own bodies. It has been stated that, “When a woman undertakes her biological role of becoming pregnant and undergoing childbirth, the society has the obligation to fulfill her basic human rights and that of the child.” We as a people need to step up and fulfill that right here in Tanzania and around the world.

It is disheartening to see how women are treated in Tanzania and similarly in other places across the globe, despite efforts for more gender equality in Tanzania. Several NGOs have help from the UN Development Fund for Women, UN Women Watch, and Pathfinder International. More localized organizations include Tanzania Gender Networking Programme, Catalyst Organization for Women Progress in Tanzania, Tanzania Women Development Foundation, and Women and Child Networking Society of Tanzania. There must be an increase in economic, political, and social empowerment of women; men and women alike must recognize that women, too, are important. 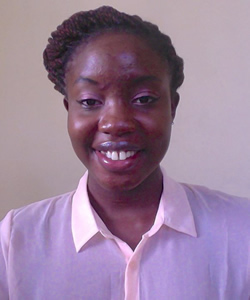 Binta Ceesay graduated from School of Nursing and Health Studies in 2014 with a major in international health. She is originally from Silver Spring, Maryland. She participated in the Berkley Center's Junior Year Abroad Network while interning abroad in fall 2013 at the National Institute for Medical Research in Dar Es Salaam, Tanzania.