Attending Compline at Home and Abroad

For the last few years, I’ve been an avid devotee of a Seattle tradition: the Compline service (the last service of the day) at St. Mark’s Cathedral on Capitol Hill. Right in the midst of the city’s busiest and most bohemian neighborhoods, St. Mark’s transforms every Sunday night at 9:30 p.m. into a small island of peace and meditation. When I’m in town, I always try and get there myself at about 9 p.m., because by the time the men of the choir file in at 9:30 p.m., the nave is packed and the parking lot is jammed out to the street.

This is not the usual Episcopal Church Sunday morning crowd, however (you can tell because there’s fewer Buicks and Oldsmobiles in the parking lot)—Compline draws all sorts, but it’s overwhelmingly university students and young people who stream in to hear the choir perform this ancient monastic service. The folks at Compline make St. Mark’s their own; they bring sleeping bags and pillows and splay themselves out on the altar and across pews to lay down and enjoy the gorgeous strains of the choir. It’s a thing to behold.

From my first week at Oxford, I’ve been enjoying the depth and richness of the Anglican tradition from which the Episcopal Church borrows. And when I found out that Magdalen College, longtime home to C.S. Lewis and one of Oxford’s most illustrious and beautiful colleges, holds their own Compline Service on Sunday nights, I was sold. I dragged a friend along, promising her gorgeous music and a good time (as far as Episcopal services go, anyway), and we walked over one Sunday evening a few weeks ago.

The first warning sign came when we realized that by showing up, we represented fifty percent of the congregation in attendance. And the real sign of trouble came when the service began without the entrance of a choir, as the other two attendees stood up and began to chant. I realized in very short order that I was going to have to fake my way through a service I had only ever listened to—never dreamed of participating in. So, without a moment’s notice, Anna and I both began to press through thousand-year-old Latin plainchants, one note at a time.

I should set the scene a little better: Magdalen College’s chapel is overbearing in the daytime, but for Compline all the lights were extinguished except the candles at the altar, which were just enough to illuminate the crowd of saints' faces crowded behind the altar, giving us a decidedly dubious look. Once the smoke from the censor started twisting around in the candlelight, I was 90 percent sure that I was actually in a movie scene.

Of any religious service that I’ve stumbled into in my life, I don’t think I’ve ever felt more in awe, more surprised, and more aware of the gravity of every motion. Nearly everything we sang and spoke that night I had heard before, but I had never been asked to do it myself. I wouldn’t be writing about it now if it hadn’t been more than a little terrifying in the moment—especially when any false note I hit would be instantly obvious. But more than scary, it was also incredibly thrilling. Here was something at once familiar and bewilderingly strange—it was a Compline service, but if I turned up with a sleeping bag as in Seattle, I think they might ask me if I had the right address.

Before I left for my year at Oxford, I assumed that studying abroad would be a study in differences: different accent, different queen, cars driving down a different side of the road. What I’ve discovered instead is that it’s often that strange combination of the familiar and the new that has the most resonance, by inviting you in and then surprising you. It’s obvious that the cars here drive on the other side (hopefully that occurs to you before you start driving, at any rate). Discovering the English variations on a common theme is when I really feel I’m in touch with the culture on this peculiar island. In some months when I return to Seattle, you’ll be able to find me back for Compline at St. Mark’s. Until then I’ll be in Madgalen College, faking my way through those chants until I make it. 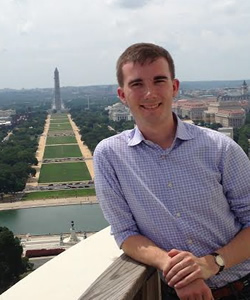