Banana Split: The Influence of Race, Identity, and Language on the Outset of My Study Abroad Experience

"Where are you from?" "Tennessee."

"No, where are your parents from?" "West Virginia."

The United States of America has long prided herself on her status as an “immigrant nation” and rightfully so. Since her inception, immigrants from countries around the globe have risked their lives for liberty, fortunes for freedom, and status for sovereignty. The traits that define an American are not those of appearance but those of thought. Tolerance and equality are our bywords and innovation our tool as we pursue a fleeting reality called happiness. Despite all of this, the stereotype remains: Americans are Caucasian or African-American. This sentiment of “naturalism” is not a new phenomenon, but it continues to surprise me in its form.

My name is Sarah Heath – which according to a quick Facebook search is a fairly common name in the United States. I grew up in a middle-class family in the South. I enjoyed riding my bicycle, reading books, talking with friends, and all of the other things that young people find amusing. I watched Sesame Street as a toddler, collected Beanie Babies in elementary school, read The Lord of the Rings in middle school, and struggled to decide which college to attend in high school. As far I as can tell, I had a typical “American” upbringing.

The difference was that I am Chinese. To many people this seems like an inconsequential difference, especially if you have lived in or visited places in the United States that have large Asian populations (California, New York, Washington, DC, etc.) However, where I grew up, there were very few Asians, let alone Chinese, in my social sphere. I was always different.

Not only was I different because of my appearance, I was also different because I am not an ABC (American-Born Chinese). I was adopted as an infant. By today’s standards international adoption has become an accepted alternative for parents who cannot or choose not to have biological children. When I was younger, this phenomenon was not nearly as widespread as the Chinese government had only just begun to allow Americans to adopt Chinese orphans. Even today, many Chinese people are not aware that this occurs.

The assumptions that people made were often more humorous than hurtful. For example, while attending a day camp one summer, a counselor pulled me out of art class because my mom had arrived to pick me up. I thought this was a bit strange since it was the early afternoon, and my mother typically did not arrive until early evening. When I got to the office, I did not see my mother so I asked the person at the front desk where my mother had gone. He looked at me and then said, “Isn’t that your mom?” I followed his gaze until I saw an Asian lady standing a little ways away.

When I was in eighth grade, I visited a local convenience store to see if I had strep throat. When my mom and I entered the room, the doctor looked at me and then turned to my mother and asked, “Does she speak English?”

I wish that I could classify these examples as isolated instances of ignorance, but unfortunately, such stories are not uncommon within the Asian-American community.

It was with these experiences in mind that I began my study abroad experience. While my major requirements and my desire to understand and experience new languages and cultures helped determine my study abroad destination, a deeper reason propelled me halfway around the globe. Unlike many students who leave home to go abroad, my journey to China was also a homecoming because, as aforementioned, I was once a citizen of the Middle Kingdom.

In some ways my time abroad is also an opportunity for self-discovery and a chance to see what my life might have been like under different circumstances. When I came to China, I was not sure what to expect, but I supposed I did, to an extent, expect more understanding. Instead, I encountered more of the same. After telling a taxi driver that I was from America, he asked if I was joking. After I explained my story, he said, “Oh I see, you don’t look like an American.”

In both countries people are surprised that I speak English fluently but only know some Mandarin. In order to reconcile this discrepancy between expectation and reality, many people assume that I am not Chinese (or at least not from Mainland China). I am asked almost daily if I am Korean, although some Chinese people also select Hong Kong or Taipei as my city of origin. For my Korean and Vietnamese friends, being asked if they are Chinese can also be aggravating.

Still, on the whole, being Chinese (but not being “really” Chinese) is a source of frustration. Even Chinese teachers have asked me why I am studying Chinese since I am Chinese. An interesting question since I have never thought to ask other Americans why they do not speak German, Gaelic, or Dutch. Perhaps though this is because we distinguish Asian-Americans, African-Americans, Latino-Americans, and Native-Americans from other people who are simply “Americans.”

Further, the language standards are simply higher for me and for my Asian (particularly ABC) classmates. If we go out into the city, if one of my non-Asian classmates speaks Chinese, people are always surprised and impressed. (They are also likely to ask for a photograph.) If I speak Chinese, no matter how complicated the grammar or vocabulary, I am always met with confusion and condescension.

After talking to friends and acquaintances about this attitude, many have expressed similar experiences, particularly if they are not fluent in Mandarin or speak it with an “American” accent. In America we are Chinese, and in China we are American. Sometimes people ask me who I cheer for in the Olympics or as my host father in Jiangxi province phrased the question, “If China and America went to war, whose side would you be on?”

For me this seems to be an unfair assumption that I want to choose one or the other. I was born in China to Chinese parents so that makes me Chinese.

My mother is a US citizen, and I grew up in Tennessee so that makes me American. Is it 50-50? Of course not. For me personally, my ethnicity and my citizenship are not the dominant factors that define who I am.

I still do not fully understand the role that race and language play in the formation of identity, particularly for me as an adoptee, but I do know that studying abroad has revealed that the way in which others view me is an excellent catalyst for further self-discovery. 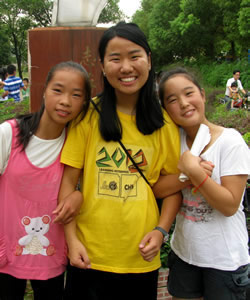 Sarah Heath graduated from Georgetown in 2014 with a major in Chinese and a minor in linguistics. She participated in the Berkley Center's Junior Year Abroad Network while studying in Beijing, China during the fall semester of 2012.
comments powered by Disqus