Ben Johnson on Race and Racism in Qatar

Qatar’s small native population makes the tiny Gulf state almost entirely dependent on foreign workers for everything from administering universities to laying bricks for the country’s constantly expanding construction projects. The resulting influx of foreigners has radically altered the cultural landscape of Qatar in many positive ways. Unfortunately, Qatar’s unique demographics have also given rise to racial tensions—in particular, overt discrimination aimed at the South Asian population that makes up the majority of the country’s unskilled workforce.

The relationship between Qataris and the foreign worker population is key to understanding racism in Qatar. Foreign workers constitute 85 percent of Qatar’s 1.6 million people, making Qatari citizens a minority in their own country. This demographic peculiarity has given rise to the fear among some Qataris that their native culture is at risk of being supplanted by foreign influences. These concerns aren’t unfounded: one of the first things you’ll notice in this country is the widespread use of English, since it’s the only common language among the many nationalities who work in Qatar. However, rather than welcoming the diverse influences of foreign cultures, there has been an attempt to isolate and preserve Qatari culture through legal and social restrictions. For example, it is almost impossible for foreigners to become Qatari citizens: after living here for decades, even white collar workers will never be legally or culturally accepted as Qataris. Qatar has also embarked on a program it calls “Qatarization,” which is designed to increase the percentage of Qatari nationals in the workplace by giving citizens priority over foreigners for job openings (interestingly, the program even has an official website—in both English and Arabic). At the social level, cultural insecurities often manifest themselves in discrimination against the largest group of foreigners in Qatar—South Asians. Although this discrimination begins with the unskilled laborers, in practice highly skilled Asian workers experience discrimination as well, regardless of their professional or socioeconomic status.

It’s important to note that while most unskilled laborers in Qatar are South Asian, not all South Asian immigrants are unskilled laborers—far from it. Many of these immigrants work in highly skilled jobs, including finance, engineering, and academia. Still, most of the foreign workers here are South Asian men working in low-income occupations such as construction, security, and landscaping. These unskilled workers are crucial to Qatar’s economic development—yet you wouldn’t know it by the way they’re treated. One Sri Lankan worker I talked with told me “the men here think they are kings, and they treat us like slaves.” Although Qatari labor law restricts working time to eight hours a day, six days a week, international organizations like the United Nations and Human Rights Watch have documented how some workers are nonetheless forced into 18 hour workdays with no days off. Worker safety requirements are also lax—it’s not uncommon to see groundskeepers working barefoot, because companies often refuse to provide their workers with footwear unless the shoes are bought from the company store at exorbitant prices.

Unskilled workers are also kept out of Doha and away from the public’s eye as much as possible. Every day the construction teams and security guards are bused to and from the “Industrial Area,” where they live in labor camps. Academics who have done studies on migrant labor in the Gulf report that the conditions of this housing ranges from decent apartment-style complexes to squalid, overcrowded plywood structures. The mistreatment of these migrant workers goes beyond a lack of labor rights and poor living conditions—it reflects an attempt on the part of Qatari society to isolate and marginalize these workers, and in so doing limit their potential influence on Qatari culture.

Within Doha itself, this discrimination manifests itself in many ways, from preferential treatment for non-Asian foreigners to restrictions on who can and cannot enter certain buildings. At most malls and shopping centers, for example, Fridays—the one day most workers have off each week—are technically “family days,” meaning that bachelors or groups of men (in other words, migrant workers) aren’t allowed in. This rule is applied almost exclusively to Asian men; there have been multiple times where, as a single white man, I have walked right past the security guards on a Friday only to see them stop a Filipino or Nepali walking behind me.

On another occasion, while I was waiting in line at the Qatar Medical Commission as part of the residency visa process, a Qatari line attendant shepherded me to a short, fast-moving line next to a longer line moving at a snail’s pace. In theory, my line was for the “VIP” visa applicants, but in reality, it was clear that race determined which line you stood in, and how the staff treated you. Everyone in my line was white, Western, and white collar; everyone in the slower-moving line next to mine was South Asian. The man standing in front of me was holding an Indian passport, and despite the fact that he held a VIP ticket and wore business attire, a Qatari attendant pulled him out of my line and sent him to the back of the slower one. I had already witnessed small incidents of racism in Qatar, but to see such blatant discrimination—separate lines for whites and South Asians—was outrageous, particularly at a government-run facility.

Witnessing this discrimination is upsetting, but on a personal level, it is also unsettling to realize that you’re part of the group that receives privileges from such racism. To benefit from a racially based system, you don’t have to be a racist; you don’t even have to seek out special treatment. All you have to do is passively accept being treated better than someone from another race—whether that means walking past security guards while they stop a South Asian man, or accepting your place in the shorter, faster line. Needless to say, I find such open discrimination appalling. In the end, however, it’s easy to recognize and criticize racism ingrained in society; it’s much harder to think about yourself as part of the system, and to do something about it.

Throughout my time here in Qatar, I have struggled to understand my own role as a foreigner living in a racially hierarchical society. I have asked myself, what can I do to avoid being complicit in a system where some individuals are given preferential treatment because of their race? Would it be enough if I boycotted malls on “family days”? Or if I left extra-generous tips for waiters, and made an effort to be friendly toward the security guards and service workers? Although those little things may ease my conscience, in the long run I doubt they’ll make any real difference. Harder still is the question of what I can do to help bring about a change in attitudes or the overall system, particularly since I’m here as an exchange student for such a short amount of time. These are difficult questions, and I’m still looking for answers. 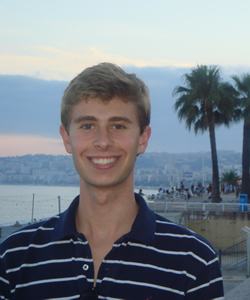 Ben Johnson graduated from Georgetown's School of Foreign Service in 2012 with an degree in international politics. He participated in the Berkley Center's Junior Year Abroad Network while studying in Doha, Qatar during the spring semester of 2011.
comments powered by Disqus