Changing Perspectives on the Chilean Protests

The recent civil unrest in Chile, which has been going on for more than a month, has consumed the final month of my study abroad experience. Ongoing protests, some of which turn violent and end in clashes with the police, happen almost every day, in numerous different cities around the country. Having witnessed several instances of violence during the protests myself, I have been grappling with the question of whether or not violence is a necessary and important element of civilian uprisings and revolutions around the world.

My initial reaction to hearing about the violent protests, including sackings of supermarkets, pharmacies, and hotels (generally ones owned by large multinational conglomerates), fires, and clashes with police, was to question the need for violence at all—how could protesters organizing to fight injustice hold the moral high ground when they are sacking, looting, and lighting things on fire? I pondered the legacies of some of the largest movements in the past and found that many of the most well-known leaders of such movements also advocated for peaceful protests. I couldn’t help but think that all the Chilean protesters were doing by causing such destruction was justifying the use of force by the police and military to stop such protests.

As the protests went on, however, and as I continued to learn more about the issues being protested, I started becoming more sympathetic to what I now understand as decades of frustration with the state of affairs for anybody outside the elite Chilean upper class. I also came to understand that the sackings and violence were a small fraction of the massive, nationwide social movement taking place, but were getting disproportionate attention in the media in an alleged attempt to divert the national conversation away from the issues and towards the delinquent efforts of a relatively small group of individuals. I learned more about the numerous social movements over the past 30 years, almost always driven by university students, that have resulted in very limited structural change, further frustrating an already struggling Chilean population. Moreover, I discovered how some of the sackings might well have been initiated and organized by the Chilean police force itself— something they have been known to do in the past in order to frame protesters.

With time, I have therefore adopted a less critical perspective towards the protests. I have also witnessed firsthand the frankly absurd number of instances of police brutality against peaceful protesters; from throwing tear gas at groups of unarmed, uninvolved bystanders, to a police officer literally running over a protester numerous times with a motorbike. (This incident was caught on video and has since gone viral, triggering worldwide calls for investigations into human rights abuses by the police in Chile.) Early on during the protests, Chilean President Sebastian Piñera declared “we are at war” in a televised address to the nation, apparently in response to the violence caused by the then-growing movement. Having seen the clashes between the police (and military) forces and protesters, I can now say for certain that this is indeed true—not, however, because of the protesters but rather because of the disproportionate use of force by Chilean authorities and the subsequent retaliation by the population.

As I begin my preparations to leave the country, I cannot help but think back at how my opinions have changed regarding the movement. And in doing so, I am reminded of the immense need to gain a full understanding of such social phenomena before developing opinions on them. Had I not seen firsthand the actions of the police, or spoken to local friends, my host family, and professors to understand the degree of injustice in the country, I would perhaps still be critical of the movement because of the small share of individuals that have been causing violence. Instead, I find myself wishing I could stay to continue learning and gaining a deeper understanding of the problems that plague this country, and witnessing the largest social movement in its history aiming to solve them. 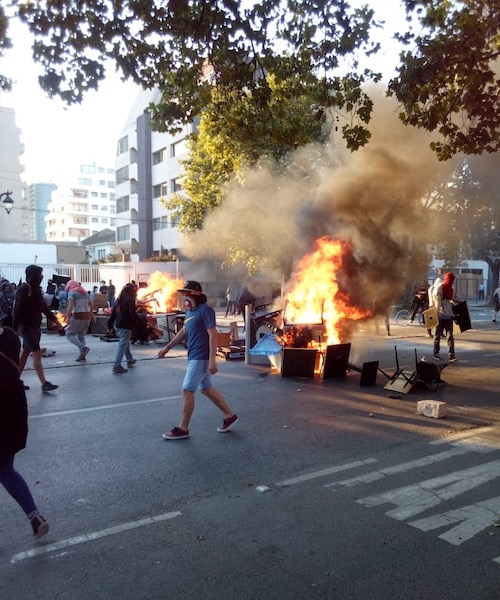