Argentina is a country that truly embraces its European heritage. With a 90 percent white population of mostly Spanish and Italian descent, it is considered both externally and internally as a European society situated in Latin America. This demographic majority mirrors the Christian religious dominance within the country. Over 90 percent of Argentines describe themselves as Christians, with the overwhelming majority professing Roman Catholicism. However, there is more to the religious landscape after you scratch the surface. Argentina is also home to the largest Jewish population in Latin America, the largest mosques on the continent, and a variety of indigenous beliefs that can be found throughout at the country. This letter will explore how different religious groups have fared within the supposedly homogeneous, Christian country.

There is no denying the Eurocentric cultural dominance in Argentina. I can personally attest to the fact that the majority of the people I have met during my time here have been both white and Catholic. Argentines tend to think of themselves mostly along these same lines. In fact, the self-perception of homogeneity has led to a particularly Argentine form of political incorrectness. For example, it is perfectly acceptable to use the word “negro” to describe anyone with a darker skin tone, and any grocery store run by people of Asian descent can be referred to as “los chinos” (literally: ‘the Chinese.’) There is no harm meant by these terms, but it reinforces the idea that those of different ethnic make-ups are easily separated from the majority in society.

This way of thinking also reflects the religious situation in the country. While non-Christian religious groups are generally tolerated, their minority status has enabled varying levels of discrimination throughout the country’'s history.

On a recent trip to the Andean province of Jujuy in the extreme northwest of the country, I learned something of the troubled history of native Argentineans. In the small town of Humahuaca we saw the Monument to the Heroes of the War for Independence with an indigenous warrior standing over depictions of battle. While the indigenous people in this region were promised many rights and benefits in return for their support in the young Argentina'’s fight for independence, few have been realized. Native religious practices were then suppressed, but some syncretistic rituals have endured. The best examples are the continued celebrations and offerings for the Incan deity Pachamama, or “World Mother,” which coincide with Fat Tuesday.

The acceptance of Judaism in Argentina has also been a complicated affair. After the first leaders declared a policy of religious freedom following independence from Spain, the country experienced a wave of Jewish immigration. Yet, after the Russian Revolution in 1917, there was a pogrom in the Jewish neighborhood in Buenos Aires, and anti-Semitism only continued to increase. Although Juan D. Perón is one of the most revered figures in Argentinean history, he further ostracized the Jewish population by harboring Nazi expatriates and strengthening the connection between the Catholic Church and the state.

The discrimination of Jews continued during the military dictatorship of the late 1970’s, and the Israeli Embassy and Argentine Jewish Mutual Aid Association were bombed in the early 1990’s. More recently, Jewish cemeteries have been desecrated, and I have even seen swastikas and other anti-Semitic graffiti in Buenos Aires.

Muslims are also marginalized in Argentina. Although there are actually more declared Muslims living in the country than Jews, their presence is largely ignored. Former president Carlos Saul Menem was actually born into a Muslim family but was forced to convert to Roman Catholicism before assuming office.

Fortunately, Argentina has made great strides in terms of racial and religious tolerance. After the dictatorship ended in 1983, President Alfonsín made human rights a top priority and appointed many Jews to high positions within his government. President Menem took these reforms even further and approved a constitutional amendment that dropped the requirement for the president and vice president to be Roman Catholic.

Yet the country still harbors discrimination within its borders. What I find most troubling is the prevalent perception of Argentina as a white, Roman Catholic nation. I know that not all Argentines think this way, but there seems to be some reluctance to acknowledge the legitimate presence of other religious groups in their society. However, I have experienced some of the rich religious culture that lies outside this one category. I have walked through the Jewish neighborhood of Once, seen an Islamic cultural center that spans a city block, and witnessed coca leaves and cigarettes being offered to Pachamama. In the end I know these different religious groups are tolerated in Argentina, but I hope that they will one day be embraced as well. 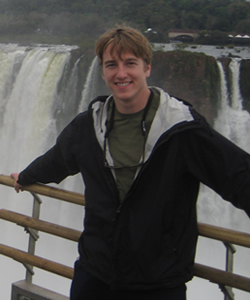 Chris Szurgot graduated from Georgetown in 2012 with a major in history and a minor in government. At Berkley Center he blogged for the Junior Year Abroad Network while studying in Buenos Aires during fall 2010 and was also an undergraduate fellow studying law, religion, and conscience.
comments powered by Disqus