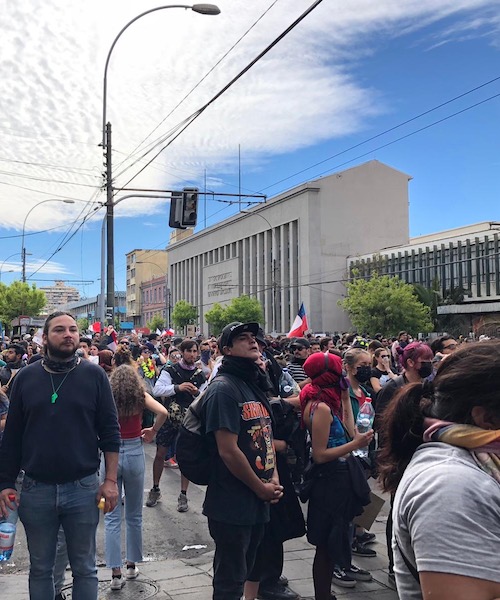 On October 6, 2019, Chilean President Sebastián Piñera announced a 30 peso ($0.04) rise in metro fares in the country's capital, Santiago. This seemingly minor increase in metro fares led to a widespread fare-evasion campaign by high school and college students that has since grown into the largest political crisis in Chile since the end of the military dictatorship in 1990.

Chile has long been seen as a beacon of hope on a continent with a truly brutal history of dictators, coups d’état, and political violence. Since the end of Augusto Pinochet’s CIA-supported dictatorship in 1990, the country’s economic and political institutions have been arguably the strongest and most stable in all of South and Central America. Yet, for many Chileans this illusion of prosperity runs in stark contrast to their day-to-day realities. Despite strong economic growth at the national level, wealth inequality remains rampant, with a recent study revealing that the top 1% owns 25% of the country’s wealth. (You guessed it! This number is indeed overshadowed by the United States, where the top 1% owns 29% of the wealth.) Minimum wage is well below the standard of a living wage, while the ever-rising prices of basic utilities compound the difficulties of living with a low-wage job. The pension system, which was privatized during the dictatorship (as were many other public goods and services, including the water industry, health care, and public transport systems), is horrendously inadequate, routinely forcing senior citizens back into the workforce. Moreover, as has been the case with numerous developing economies around the globe, political scandals and corruption have plagued the Chilean government over the past few years, with President Piñera, a wealthy businessman from a family with a long and controversial political history, embroiled in a few scandals of his own.

Given these rather dire circumstances for the majority of Chileans, the rise in metro fares and the subsequent instances of unnecessary and excessive force employed by the Chilean police to stop the fare evaders exploded into nationwide civilian unrest that encompassed far more deep-rooted socioeconomic issues. Chile, right on cue, claimed its place in the ever-growing global orchestra of civilian unrest targeted towards wealthy and powerful elites.

Contemplating Chile’s role in world affairs in light of these developments is a complex issue. As a student from the United States, it is hard to ignore the role of the U.S. government in causing this conflict. The United States, through the CIA, helped orchestrate the military coup in 1973 following the election of a socialist president in Chile. The subsequent bloody dictatorship laid the groundwork, at least from an economic standpoint, for the neoliberal policies that have given rise to many of the issues that plague the country today. While this certainly does not seem to be the general sentiment towards the United States by Chileans, I have indeed had to come to terms with the fact that Chile, just like far too many other countries around the world, in part owes its modern sociopolitical struggles to the United States and its unnecessary and immensely consequential interference in foreign matters. As a result, it certainly looks like the recent unrest has shattered the global illusion of Chile as a prosperous, capitalist utopia.