Everyone wants to offer their opinion on everything. But no one is talking about all the issues when it comes to race in America. Some people talk about racial violence. Others talk about how the demographics of the country, and sub-sections of our country, are changing and how this is a great and necessary time to talk about race. Others are talking about how there are still race riots going on all over our nation and we need to figure out solutions. Still others, including many universities, are talking about how to be more inclusive and welcoming and quietly talking behind closed doors about the implications of the Affirmative Action hearing that will go before the Supreme Court in the fall. However, the majority of us aren’t having new, or all, of the conversations.

What I mean by new conversations is that many Americans thought that Barack Obama would be able to help us have a more meaningful and necessary discussion about race in our nation. He said in his March 18, 2008 speech in Philadelphia, Pennsylvania:

“Race is an issue that I believe this nation cannot afford to ignore right now. We would be making the same mistake that Reverend Wright made in his offending sermons about America- to simplify and stereotype and amplify the negative to the point that it distorts reality.”

However, Obama hasn’t talked about race. I consider myself an Obama supporter; but I would say that one of his biggest promises upon which he has not delivered was a new and nation-wide dialogue on race. It is an incredibly politically charged issue and I understand why he hasn’t talked about race more. As a black politician in America he would have a very challenging time talking about and addressing issues through a racial focus without seeming, to the majority of Americans, like he was catering to the black community. Furthermore, one could argue that he shouldn’t have to just because he’s black. Why should he have the burden of re-framing the dialogue around race in America? I would say he doesn’t have to, but it is an opportunity to do so. An opportunity he hasn’t taken.

While Obama hasn’t led the charge on having a new discussion about race in America, our demographics continue to change. There are people now personally confronted with race who have never even thought about race before, because there are now Hispanic families in their schools or in their neighborhoods. There are estimates that the US will be fully a minority country by or before 2050, the Smithsonian says:

“Whites will no longer be in the majority. The U.S. minority population, currently 30 percent, is expected to exceed 50 percent before 2050. Latino and Asian populations are expected to nearly triple, and the children of immigrants will become more prominent. Today in the United States, 25 percent of children under age 5 are Hispanic; by 2050, that percentage will be almost 40 percent.”

These demographic changes will make the US one of the only racial minority countries in the world. From the very beginning we have been a country of immigrants, but how and why different racial groups came to America continues to have implications for how we do and don't talk about race. 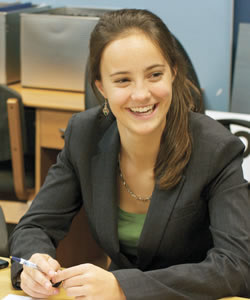 Clara graduated from Georgetown's School of Foreign Service in 2013 with a degree in science, technology, and international affairs. In 2012, she was a Millennial Values Fellow in conjunction with the Berkley Center's project on young Americans, faith, and values.