Crossing the Street Across Cultures

Crossing the street in Morocco, where I am studying abroad this semester, is quite different from crossing the street in the United States. Essentially, the norms of the road, for both pedestrians and drivers, are more relaxed here, whereas in the United States, the rules and laws—stoplights, crosswalks, yielding, stop signs, and the like—are comparatively stricter and almost universally followed.

During our 30-minute walk to school in the capital city, Rabat, my classmates and I have to cross several streets. To do so, for most of these streets, we just walk out into the oncoming traffic, and the cars stop for us, letting us walk across. We’re not being reckless pedestrians or anything—that’s just how it works here. It’s a new system that definitely seemed, well, a little weird to me at first.

My first few weeks in Morocco, it felt strange and different to have to adjust to this new way of navigating a busy city. I felt like I had to be on high alert whenever I was out walking into traffic, and I was always a bit nervous when many cars seemed to be just a little too close for comfort. Frequently, I found myself looking both ways multiple times before crossing. My first impression of this system was, in all honesty, somewhat negative, as it seemed dangerous. But I soon realized that my first impression, as is often the case with first impressions, was not quite accurate.

Indeed, when I left Morocco to visit Europe during my fall break, I found that I’d become so accustomed to the Moroccan way of crossing the street that I almost walked right into traffic on the first day of the trip. My travel companions, who were also coming from Morocco, and I had to remind ourselves that we needed to readjust to a familiar, more Western way of navigating around traffic.

I’ve had similar changes in perspective relating to other parts of my time in Rabat. For instance, sometimes professors are quite late to class, which initially was confusing and even a little frustrating to me. But it’s not really worth getting hung up on since it’s just a part of university life here. On the bright side, because of the wait time, I am able to chat with students before class. Often these conversations present opportunities for meaningful cultural exchange—Moroccan students are eager to hear about what I am doing in Morocco and where I am from, just as I am eager to ask them about their lives.

The realization that I should not be so quick to judge a different way of doing something sounds very obvious. Indeed, I wish I’d come into the study abroad experience with that perspective in mind from the beginning. Maybe it’s only natural to feel some internalized bias toward your home country’s norms versus the norms of a new culture, but I’m starting to finally appreciate that I have a responsibility to not only to keep an open mind and acculturate to my host country, but also to come to appreciate Moroccan culture for all of its differences. After all, sometimes, it’s nice to not have to wait to cross the street in Morocco. 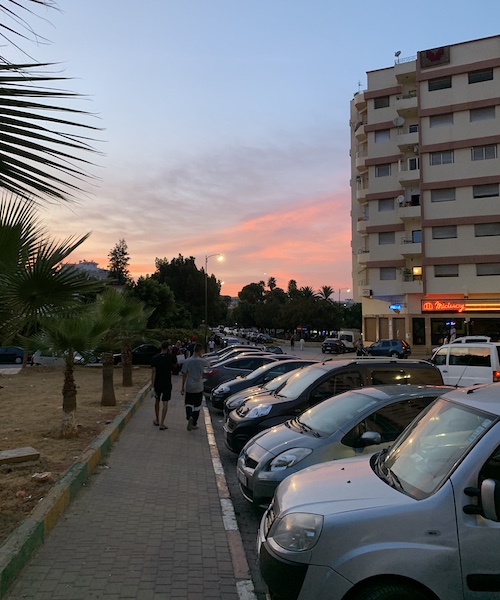