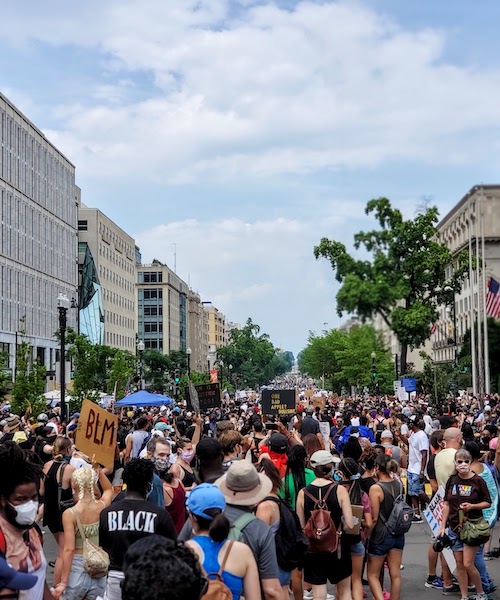 I see no Malayans. I see men of many worlds and many nations. I see faces of all colours. Faces that look at each other in mute incomprehension…How do you propose to persuade Malays, Chinese, and the rest to give up all their prejudices and preferences and adopt what you call "Malayan consciousness"? — Sinnathamby Rajaratnam, A Nation in the Making

On a visit to the National University of Singapore Museum, I was struck by this excerpt from a six-part play written by Sinnathamby Rajaratnam, who served as Singapore’s first foreign minister. The quote—which snakes across the wall on one side of the exhibit, cutting through displayed images and texts and looping around corners—epitomizes the central considerations and conflicts in building a national identity and the challenges that Singapore faced after gaining independence from Malaysia. Multiculturalism, which is the idea that cultural pluralism is inherently good and productive, is one of the main pillars of Singaporean society, with all of its religious, ethnic, and linguistic diversity. Many of the government’s policies are built on multiculturalism, particularly in acknowledging the four main racial groups through what is known as the CMIO model: Chinese, Malay, Indian, and Others. Considering Singapore’s contemporary racial discourse, it was eye-opening to see the exhibit highlight the inevitable challenges in efforts to promote diversity.

It’s interesting to see how these issues play out in other parts of the world, especially with how Singapore upholds multiculturalism in its practices. I was particularly surprised to hear about “reserved presidencies” in Singapore, which reserves a presidential election for a community that has not been represented in office for a certain period of time. The idea that specific minority groups are prioritized for positions of power was something I was shocked to learn about, especially coming from the United States, but it illustrates some of the ways in which Singapore has made concrete steps to foster diversity. But Singapore isn’t perfect either—racial tensions and prejudices still exist, even as the country lauds and promotes its racial harmony.

During one of my classes this semester, Culture & Communication in Singapore, we discussed racism and discrimination in Singaporean society, touching on a particular instance that incited controversy on social media. In 2019, a Singaporean actor named Dennis Chew was featured in an advertisement in which he portrayed different racial minorities through darkening his skin and emphasizing stereotypes of Indian men and Malay-Muslim women, sparking outrage for being “racially insensitive.” In response, YouTuber Preetipls criticized the brownface of the advertisement in a rap video harhsly disparaging the Chinese majority, which was ultimately deemed offensive and removed by the police. Some supported the removal of Preetipls’ video given its inflammatory content, but others pointed out that those responsible for the original advertisement settled the situation with a mere apology—while Prettipls was subject to police investigation—and criticized the government’s censure of minorities who call attention to racial prejudice. Ironically, Preetipls’ response was censored to preserve racial harmony—the same response that attempted to critically engage in racial discourse and candidly express the frustrations of minority groups.

After hearing about this incident, I started to glimpse some of Singapore’s not-so-glamorous realities peeking through the cracks of the polished image I began the semester with. Seeing these racial tensions in a place that I had perceived as an exemplar of inclusivity and harmony emphasized for me the universal struggle of uniting people who are different from each other. How do we promote diversity amid the discord that arises from racial, cultural, and religious differences? Or in Sinnathamby Rajaratnam’s words, how do we persuade people to “give up all their prejudices and preferences” and live together in unity under a shared “consciousness”?

It’s a question that has continued to occupy my thoughts, especially after coming back to the United States and witnessing the outrage and unrest of the last few weeks. As protesters in the United States continue to demand justice for the murders of George Floyd, Breonna Taylor, Rayshard Brooks, Ahmaud Arbery, and countless other lives lost at the hands of police brutality, I’ve begun to understand how fundamental the divisive rhetoric and racist institutions are to our collective narrative. Our country was founded on inequalities and continues to thrive off of and exploit these inequalities—how can we unite under an “American consciousness” that was meant to exclude specific groups of people from the beginning? Amid the ongoing protests, I wondered if the United States could ever become whole again, but more and more, I wonder if it ever was in the first place.

But I see the potential for change. I’ve been in awe of the support sparked across the globe as protesters from Paris to Toronto to Brisbane march in the streets in solidarity—people recognize that Black Lives Matter isn’t just an American issue. Racial injustice is and has been present everywhere, even before it became a topic of mainstream media. The recent events have only amplified the voices of outrage and forced a broader public audience to confront the racism that has always existed. And people are confronting it. I’ve noticed more online content in Singapore commenting on the movement and reflecting on discrimination and prejudice within its own borders. In a stirring video I came across on social media, a woman at a protest in South Korea ardently urged people to stand in solidarity and recognize anti-blackness in the Asian community.

I’ve felt more compelled to educate myself on our history’s inextricable ties with racism and to engage in difficult conversations with my family and friends. As much as we need sweeping, systemic upheavals at an institutional level, change also needs to happen in the individual, in our day-to-day interactions, in our behaviors and mindsets. And as broken as our society may be, I think the first step in answering the question of this elusive “collective consciousness” and achieving some semblance of unity—whether in Singapore, the United States, or even on a global scale—lies in these personal shifts. It demands that we acknowledge our individual shortcomings and gaps in understanding and strive to respect and embrace the appearances, perspectives, and experiences of those who are different from us.