On the streets of Madrid, the capital of Spain, to see a Spanish flag fluttering here and there seems like a given. Accustomed to American flags being commonly displayed back home, I never really took note of the red and gold banners, assuming they were everyday expressions of Spanish pride. However, political context gives the Spanish flag and Spanish identity a slightly different meaning.

Spain, though small, is a diverse country in terms of its customs and people. It comprises 17 autonomous regions or provinces, each with its own heritage and traditions, and in the case of Galicia and Basque County, for example, even their own language. As a result, it is no wonder that Spanish identity might be hard to define, an uncertainty that extends to national symbols as well. As my host mom explains, the Spanish flag carries far less meaning than one might attribute to a national flag—there is very little allegiance to the flag itself as a symbol because there is so little agreement on what it means to be Spanish.

Currently, Spain’s (arguably) biggest political identity crisis is the issue of Catalonian independence. The referendum for Catalonian independence two years ago, ensuing crackdown on separatist leaders, and ongoing protests and riots in Catalonia serve as reminders that Spain is a ways away from developing a cohesive national identity. This is a rift in Spanish unity with no foreseeable resolution, especially since some schools in Catalonia have stopped teaching Castilian Spanish so that young Catalonians learn to speak only Catalonian, despite being officially Spanish by birth.

During our discussion of Spanish national identity, my host mom pointed out the window of her apartment, where we could see rows and rows of other balconies, occasionally dotted with the Spanish flag. She said, “You see those? They’ve been up for at most a year.” She also explained that most of the flags were old and dirty from lack of use and had been finally dusted off to make a point. As a result of the attempt at Catalonian independence, the Spanish flag has started popping up more and more as a symbol of unity—not in the traditional sense of community or acceptance, but rather a unity that threateningly pushes back against Catalonian separatists. Paradoxically, the idea of nation and unity itself is dividing Spain.

The Spanish identity crisis is also revealed at the polls. In recent Spanish elections (four in the past four years), politics have shifted more to the right while at the same time becoming much more polarized. In the last election, while the center-left majority party (PSOE) still won the most seats, it saw an overall decline in number. Meanwhile, the center-right party (Ciudadanos) was almost completely eliminated, and seats instead went to Vox, a nationalist/radical right-wing party that has recently gained traction in Spain. With its anti-immigrant rhetoric and aim to abolish regional autonomy, Vox is yet another manifestation of the rise of nationalism and increasing polarization sweeping across Europe. In another form, the idea of nation and unity (albeit an extremely distorted one) is again becoming a source of extreme division in Spain.

Division is clearly not a foreign concept in many countries, past or present. When I traveled to Berlin, much of my experience there was in one way or another dominated by the lingering shadow of the historic Berlin Wall. In Belfast, I was shocked to discover that the Troubles are far from over. Unionist Protestant and Republican Catholic communities still live in segregated neighborhoods, literally divided by so-called Peace Walls (over which members of respective communities occasionally will throw rocks and other projectiles).

However, even as division remains apparent within many countries, communal divides have increasingly become a source of unity beyond borders. In Berlin, remnants of the wall have been converted into street art galleries, where artists and visitors alike have written or painted messages proclaiming solidarity with protestors in Bolivia, Chile, and Hong Kong. Likewise, the Peace Walls in Belfast are decorated with countless notes of unity and love, such as “Build bridges not walls”; “No más barreras”; and, “Take down this wall.” Most notably, entire stretches of wall are devoted to struggles for freedom in other countries, such as murals proclaiming “Justice for Palestine” or even a section depicting prominent leaders of the U.S. Civil Rights Movement. Evidently, while fragmentation is a common theme that is hard to ignore, these conflicts seem to have transcended borders, becoming interconnected in a way that suggests an international struggle for freedom.

From Spain to these other countries, unity and division are opposite concepts that continue to become entangled. National identity typically intends to unite, but the process of creating national identity itself has become a source of division. Instead of uniting within nations, people have turned to connections across nations, creating a more global consciousness.

In my last month abroad, I find myself reflecting more upon what I will bring home with me to America. Unlike other nations, America is supposedly founded upon civic/universal values such as freedom and democracy rather than a shared history or heritage. However, when it comes to divisions, walls, and political polarization, America is not an exception. In recent years, America has also followed the international trend of increasing nationalism and has fallen victim to division and walls as a result of distorted messages about unity and nation. While America has usually considered itself the model of freedom, this time, I wonder what it might learn from the world instead. My time in Spain has taught me that each country faces its own political challenges. However, global calls for love and unity can still persist and arise out of national division, and ultimately it is this lesson that I will keep in mind when I return home. 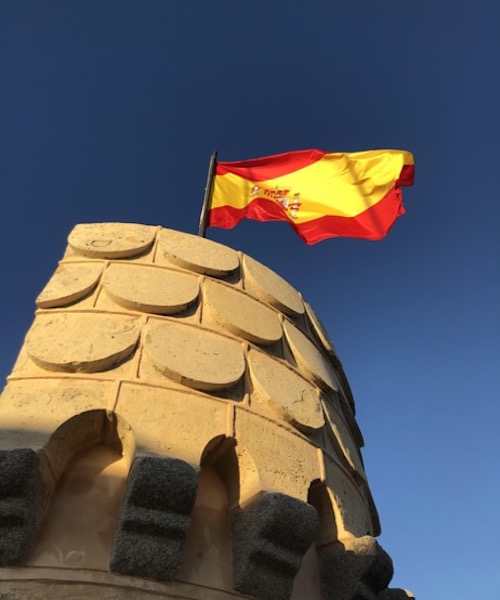