Do you ever get the feeling that someone is watching you? It seems like you can never escape this feeling in Edinburgh, and it is not just because statues of the likes of Adam Smith and David Hume peer down at you from their perches atop marble pedestals as you walk down the Royal Mile. The city of Edinburgh is widely considered to be the most haunted in Europe. With a history spanning back thousands of years, the area that is now known as Edinburgh has a rich history filled with legends of witches, ghosts, and other paranormal phenomena.

For many years, Scots practiced witchcraft in peace as many of these individuals were considered to be healers. During the Middle Ages, belief in magic was widespread; however, beginning in the late fifteenth century, the general attitude shifted toward one of fear in Scotland. This shift really began when the belief that witches derived their power from the devil began to spread. This negative feeling toward witchcraft increased exponentially after King James VI suspected witchcraft to be at work after storms at sea foiled his numerous attempts to bring his prospective bride to Scotland from Denmark. This led to a period that lasted more than 200 years during the sixteenth and seventeenth centuries in which thousands of witches were tortured and executed in Scotland. Just to put it in perspective, 185 people were accused of witchcraft during the Salem Witch Trials, compared to the estimated 4,000 to 6,000 witches who were put on trial in Scotland.

One of the many ghosts who supposedly haunt Edinburgh is that of Lady Janet Douglas of Glamis. She was accused of witchcraft in 1537 and imprisoned in a dungeon of Edinburgh Castle. Even though there was little evidence against her, she was convicted and burned at the stake on the esplanade of Edinburgh Castle. While it is unclear whether or not her ghost really haunts the castle today, there is a very real reminder of this dark time in Scotland’s history located at the bottom of the castle esplanade that can be seen today. There is a small well known as the “Witches Well,” in honor of the hundreds of people who were burned at the stake on the esplanade for supposedly practicing witchcraft.

While this all might seem a bit ridiculous to some, both the economy and culture of Edinburgh have been greatly impacted by the city’s supernatural reputation. J.K. Rowling drew inspiration from Edinburgh when writing her Harry Potter novels. In fact, she did most of her writing in Edinburgh cafés scattered throughout the city. The Harry Potter global brand is worth billions and has been hugely beneficial for the Edinburgh economy. Tourists come from all over to explore the magical locations that inspired characters and scenes in the series. In fact, there are walking tours of Edinburgh specifically designed for Harry Potter fans. However, exploring Edinburgh’s supernatural side is not just for fans of J.K. Rowling’s novels. On any given day, the Royal Mile is lined with costumed tour guides advertising haunted ghost tours of the city. These guided tours allow modern people to come face to face with the supernatural creatures that haunt Edinburgh. Even if you are not one for scary stories or paranormal phenomena, if you feel like someone is watching you as you walk through the streets of Edinburgh, you may not be imagining things. 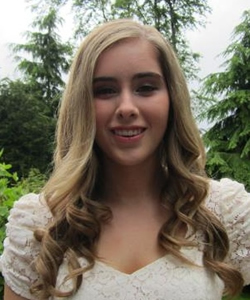 Julianne Reilly graduated from the McDonough School of Business in 2016 with a major in international business and finance and a minor in government. She is from Seattle, Washington. She spent her fall 2014 semester studying abroad in Edinburgh, Scotland and blogging for the Junior Year Abroad Network.