Elisabeth Harvey on the Culture of Patriotism in Germany 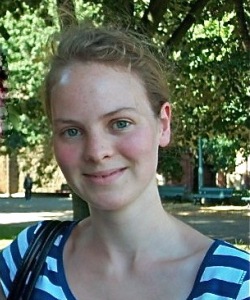 Wandering around the Schwaben neighborhood of Munich near the university last week, I instinctively felt that something was somewhat different, a bit abnormal, about the intersection of Schellingstraße and Amelienstraße. I absorbed the scene that presented itself: crosswalk teeming with students. Quaint German restaurant, Gaststätte Atzinger. German flag.

Part of the problem of explaining what was “off” is that the German version of patriotism cannot be easily understood in the American context. When Americans think of the tangible signs of patriotism, the strains of Lee Greenwood waft through the air, we think of the colors of the flag, and we envision all the trappings of a Fourth of July celebration.

Patriotism in Germany, however, is usually a much more subtle affair. In fact, the one place where I can remember seeing a flag with some regularity is in front of the Bundestag in Berlin. Because of the country's cultural and historical background, patriotism has been viewed with a solid dose of suspicion for many years. The only time period in which flag-waving, national anthem singing patriotism has attained a kind of normality in German modernity is in the context of soccer. In 2006, I spent the summer as an exchange student at a boarding school near Munich. As the host of the World Cup, Germany was cautiously exploring the meaning of international prominence, while also tentatively enjoying the national fervor that seemed to heighten with every successful match. As the national team advanced through the tournament, the flag began to appear all over the place: candy bars, wigs, face paint, cars, jerseys, etc. For Germans, soccer creates a safe culture of national unity, divorced from the political and military context of previous nationalist movements.

Still, soccer-based patriotism has its skeptics: I remember my history teacher holding a very earnest discussion with my class about the difference between nationalism and patriotism, and then having us write an essay about whether we thought that the current atmosphere represented nationalistic or patriotic sentiment. Although his definition can naturally be debated, it has remained with me to the present day. He argued that patriotism means a pride in one's country, whereas nationalism means a pride in one's country that ceases to be based in reality that depreciates the value of other countries by comparison. By that interpretation, which can only be understood in the ideological context of the then-expanding European Union, soccer becomes an acceptable realm to express patriotism, rendered neutral by the chivalric code of sportsmanship.

But what about everyday German patriotism? After all, Gaststätte Atzinger has been flying their flag months in advance of the FIFA World Cup. Even if displays of the flag are generally an exception to the rule, Germans do seem to have several distinctive, albeit less tangible, methods of expressing a sense of cohesiveness. On the national level, many Germans express an affinity for their own products, a willingness to sacrifice the more American consideration of price, for the German concept of quality. German cars, German electronics, and German beer are usually associated with a certain standard, a qualität, because they carry distinctive brand names: Braun, Bosch, Siemens, or Zeiss, for example. Even for my mother, who has spent several decades living in the United States, digital cameras become instantly more appealing when they have the coveted Zeiss lens.

The other difference between German and American patriotism is that Germans frequently have a strong regional identity that sometimes displaces the nation-centric patriotism. Particularly in Bavaria, it is quite acceptable to display the blue-and-white checkered state flag on a regular basis. The practices of speaking a dialect and of wearing distinctive traditional clothing (dirndl and lederhosen) contribute not only to a more decentralized national consciousness, but also to a common cultural identity within the region. Through its pride in its manufacturing and through its regional affiliations, German patriotism subtly expresses itself through alternate forms diverging from the more overt American model.