When I look back to the discussions and social media content that were part of the Doyle Global Dialogue (DGD), I realize that I have developed a better understanding of different cultures. I have started appreciating the different lifestyles that Qatari people live. I always wondered about how I could hold a conversation regarding Qatari culture, politics, and religion without becoming biased. However, delving deeper into the culture of Qatar, I was able to appreciate the differences that I noticed during my stay in the country. The program not only gave me a platform to put forward my thoughts about the culture of my host country, but also taught me to have an open mind. Moreover, the insightful discussion posts of my colleagues were a significant part of my learning.

The first month offered me a chance to look back to my country’s ethics and social mores while comparing them with my host community. The first thing that comes to mind when I think about the ethics of my host country is the dress code in public places. Qatar has a dress code for men and women in public which doesn’t allow men to wear shorts above the knee and women to wear anything which is too revealing, transparent, or above the knee. This dress code is something that makes Qatar culturally distinct. After engaging in deep discussions about the dressing style that Qatar prohibits, we came to a conclusion that it is expected from visitors to respect the modest Islamic culture of Qatar.

The Qatar blockade was one subject I had not explored previously, but reading discussion posts from the second month helped to shed some light on it. The Qatar blockade is one of the major political events that the country has faced in recent years. As the blockade was lifted in 2020, the topic became the talk of the town. The most fascinating part is how Qatar came out of it stronger and powerful.

Writing monthly social media posts taught me two things: how to write using fewer words and how to appreciate two different cultures at the same time. For example, in my post about religion and culture, I mentioned how culture in Qatar was greatly influenced by Islam—unlike in India, my home country. I realized that Qatari culture, even though influenced by religion, is more open to foreign cuisine and has a relatively liberal environment. This is due to the large number of expatriates and immigrants in the state. Food was the biggest challenge for me due to fewer options available for vegetarians, but I learned to adjust my food habits over the course of my time in Qatar.

I also explored the elections in Qatar, which made me talk more with my friends based in Qatar. The conversation involved discussions and debates about free elections not being conducted in Qatar. In conclusion, we realized that the population is satisfied with the current political situation in Qatar. Thus, people do not demand to conduct elections. I connected these conversations to a government course that I took in the spring semester, where we learned that although democracy is the most sought-after political structure, other types of government are also appreciated in non-democratic countries.

I struggled to differentiate between culture and society. Are culture and society the same thing? Or are they interlaced? I spent some time researching Qatar’s society, and then I focused on my experiences. Qatar lies at the intersection of religion and society, as Islam is the prominent religion in the state. The society is basically structured on the basis of Islamic rules. For example, there are separate prayer rooms, beaches, and sitting areas for men and women in Qatar. With increasing modernization in Qatar, the state has successfully maintained its Islamic values and ethics.

Some of the themes that emerged while I was abroad include the importance of art and history, food, language, architecture, music, and festivals. The beautiful Arabic calligraphy is awe-inspiring. Also, the Arabic language, which is initially tough, is a lovely language to learn. I learned basic Arabic in my first semester, and I was able to appreciate the soothing Arabic music. One can hear Arabic songs playing in cabs, radio, and malls.

I have also learned that the architecture of a country is the first impression that visitors have. Souq Waqif has successfully restored the old architecture of Qatar. The houses were made of brown rocks and wooden doors. The architecture in Doha is also greatly influenced by the modernization process. The new architecture in Doha is incredible, as futuristic libraries, magnificent skyscrapers, sports stadiums, and museums are simply stunning. The magnificent architecture of Doha has won a place on the world map. The DGD program gave me an opportunity to observe and appreciate my experiences during my stay in the country. I am extremely grateful for everything that the program offered over the course of three months. 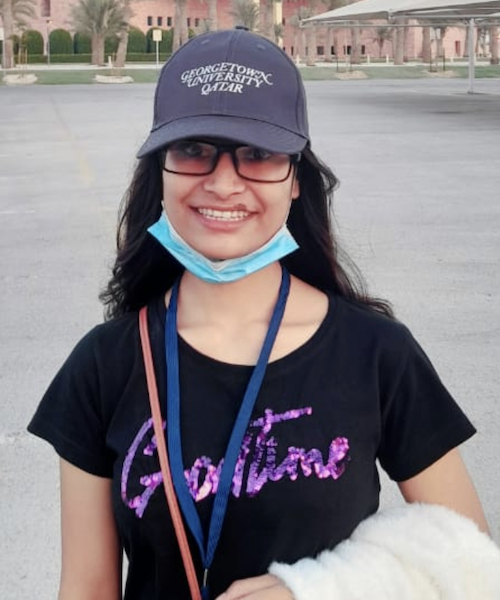 Shikoh Zaidi (SFS’24) is an undergraduate student at Georgetown University in Qatar. She plans on majoring in international politics. Originally from India, Shikoh enjoys learning about the intersection between religion and culture as it pertains to political situations in various countries. In her free time, Shikoh loves to read, dance, and spend time with her friends. When her schedule allows it, Shikoh finds herself practicing an Indian classical dance form Kathak.