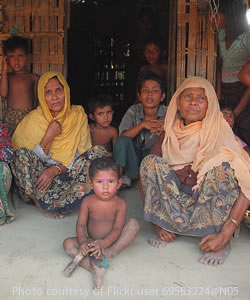 The recent Passover holiday, commemorating the liberation of the Jewish people from slavery in ancient Egypt—a story that has been such an inspiration for countless struggles for freedom ever since—permeated my thoughts in late March, as I visited Rohingya refugee camps on the Bangladeshi-Myanmar border. Together with a delegation of Christian, Buddhist, Muslim, and Jewish leaders, we met in the camps with religious leaders of the community, with women who had suffered trauma, with fathers who had witnessed infant children killed, and children whose parents were slaughtered. They had arrived through their own exodus from oppression to safety.

In the visits to the camps over two days, we split into groups focused on varied themes: The apartheid-like conditions Rohingyas in Myanmar suffered, such as loss of citizenship and severe educational, employment, and movement restrictions; the precipitous decline in religious freedom since 2012 with the closing of religious schools, mosques, and restrictions on the mulahvees (imams); the brutal, explosive violence so many encountered that drove them to flee, only to find hardships on their journey from Myanmar and challenges now in the camps; and above all, what were the prospects for repatriation?

I had visited Myanmar and met with Rohingya leaders as one of my visits to 35 countries during my two year tenure as U.S. ambassador-at-large (AAL) for international religious freedom. On that visit, and in some 65 different speeches over those two years, I had raised the plight of the Rohingya and warned that the international community had to act more assertively to prevent a catastrophe. The very last trip I took as AAL in December 2016 was to these same camps to hear firsthand what had driven a prior wave of some 70,000 Rohingya refugees to flee Myanmar that fall. The stories of oppression, persecution, murder, rape, and the burning of villages were heart wrenching.

The stories this time were the same, but now there were clear differences. The brutality visited on them was more intense, and their sense even keener that the silence and indifference of the world to earlier Myanmar abuses had emboldened their oppressors. The immense number (some 700,000) of new refugees was straining the ability of NGO groups to provide for the needs of the masses of new arrivals. Bangladesh—a nation that has shown enormous generosity of spirit and resources in welcoming and meeting the needs of one of the largest waves of refugees in the history of the world—was feeling the impact. Estimates are that humanitarian needs alone in this next half year will cost a billion dollars. Prices for produce and necessities in areas around the camps are escalating. Sex traffickers are actively recruiting, preying on the despair of the refugees in the camps. The impending monsoon season leaves refugees in the camp, which is set on a hillside, vulnerable to cholera outbreaks with little infrastructure to prevent this additional public health issue.

Make no mistake about it: Our visit poignantly reaffirmed that this is one of the worst examples of ethnic cleansing that the world has witnessed since the end of World War II. The perpetrators have clearly engaged in crimes against humanity in the brutal attacks on the Rohingya. Experts are debating whether these abuses constitute the technical definition of genocide. But regardless of the answer, the world has the obligation to prevent genocide from being carried out.

We asked everyone with whom we met (Bangladeshi political leaders, NGO leaders, each of the groups of refugees): What are the paths of resolving this crisis? Everyone called for Myanmar State Counselor Aung San Suu Kyi to immediately allow humanitarian groups and fact finders into the Rahkine region. Most refugees insisted that they wanted to return, but that they will go back only under three conditions: Safety and protection secured by an international force; accountability before international courts for the perpetrators of their persecution; and the granting of clear citizen rights in Myanmar. The likely opposition of the Myanmar government to each of these, combined with the total destruction of the Rohingya villages as documented by satellite imagery, suggests it is very difficult to see these conditions being met in the foreseeable future.

The dilemma is that the demands of the overwhelming numbers of refugees threaten destabilization within the camps in Bangladesh. Where a year ago I visited overcrowded camps that nonetheless were passable and, for example, in one of the largest, maintained a soccer field and some open areas, now appeared to be wall-to-wall as far as the eye could see. Some refugees talked of living on two meals a day, and in some cases only one. The medical providers and those charged with developing the infrastructure in the camps acknowledge that they are overwhelmed. Among the refugees, an abiding appreciation for refuge is tempered by a growing hopelessness as to their prospects. These combined challenges portend destabilization and despair that will create ripe opportunities for extremists to recruit followers.

A few of the Bangladesh leaders we met pushed back to the repatriation dream. They questioned whether the time had come to acknowledge that this was not a feasible path in the foreseeable future and suggested that Bangladesh ought to develop plans to absorb a large number of refugees while at the same time pushing for the international community to cooperate and take in its fair share in resettling refugees.

As with the ancient Israelites, the “liberation” they experienced was just a first step in a long, many-year journey to true freedom, every step replete with challenges and difficult decisions.