Faith and Modernity Have Muddled Senegalese Views on Sexuality

One of the most singularly bizarre experiences I have had so far during my semester happened one night in a Car Rapide. Car Rapides are a thoroughly Senegalese form of transportation: they are medium-sized mini buses with several rows of benches inside; they have no set destinations or routes—they merely go where the majority of the people who jump on want to go; they also kind of resemble the Mystery Machine from Scooby Doo, due to their very colorful decorations, mostly pertaining to Islamic confreries and marabouts (religious leaders); nearly all feature the word “Alxamdulilah” (“God is great.”) emblazoned between the front headlights.

It was inside of one of these Car Rapides that I heard, amongst many other fairly racy American hip-hop songs, the Saturday Night Live faux-rap trio the Lonely Island’s parody song “I Just Had Sex.”

This experience was bizarre mainly due to the stark contrast between the depictions of conservative Islamic leaders and the multi-leveled, ironic, explicit American song about sex. Yet, this scenario illustrates a larger paradox in Senegalese society. Young people in Senegal are all about America. While they might disprove of Americans, American politics, and American global attitudes, American music, American clothing, and American movies are prevailingly popular.

The issue is that stereotypically modern American culture comes with a lot of sexuality. American movies are sexual, American songs are sexual, Americans dress fairly provocatively, etc. However, despite how much these cultural elements are embraced in Senegal, the overwhelmingly Muslim population will very clearly and definitively tell you that they do not approve of promiscuity, marriage without the purpose of having children, or homosexuality.

In short, this leaves me fairly confused.

A good analogy is the acceptable dress code for women in Senegal; despite such a strong presence of Islam, the veil is not prevailingly common. Women wear both traditionally styled long wrap skirts, but also jeans. You may absolutely never wear shorts or skirts/dresses above the knee, but the tiniest, tightest tank top imaginable is more than appropriate. This makes it very unclear if the pants regulations are for purposes of modesty, or is it just another manifestation of Senegalese attitudes towards women?

The same applies to sexuality overall in Senegal, particularly among the youth: is the blatant sexuality expressed in modern youth culture just modeling America’s, without fully understand the sexual overtones? Or is it a rejection of earlier societal attitudes about sexuality?

An example of the confusing muddle sexuality, faith, and modernity have created in Senegal is illustrated in a day at the beach last weekend. I was at the beach with a friend and her host brothers, both of whom are college-aged. A young couple had snuck into a pool of shallow water, partially hidden by some rocks, and were exhibiting some fairly risqué PDA. There were a lot of little children running around on the sand, in plain view of the amorous couple. My friend’s host brothers started yelling at the couple to cease and desist, as they were being inappropriate in front of the children. The couple eventually did stop, but only after confronting the brothers for their meddling.

Once the situation had diffused, we were left there chatting about the situation and what exactly had happened. My friend’s host brothers were outraged that this couple would have engaged in such behavior in the view of impressionable children. They saw this as morally flawed. However, they said that if the couple had wanted to conduct such behavior in the same location, later on in the evening once all the children had gone, or even inside a private hotel room, that would have been acceptable.

“Whatever a girl wants to do with her man, as long as it’s out of the sight of children, that is fine by me.”

I find this attitude very confusing, as an American for whom sexuality and promiscuity is somehow linked with alcohol, considering that these same boys will go out to a club, dance very sexually until all hours of the night, while all the time sipping on some apple juice, because, under Islam, one is not supposed to drink. So, their attitude of sexuality does not come from a flat-out rejection of such religious rules. And, at the same time, while they are very accepting of heterosexuality, they have no tolerance for homosexuality whatsoever.

I have not been able to make sense of it. I cannot figure out what elements of these youth practices stem from Islam and religion, what from tradition, and what from a change in youth perspectives from the older generation. To add to the confusion, on a weeklong trip our program took to more rural parts of the country, I met a 25-year-old man who was to marry his “woman,” who is 17 in one week. The couple has a 1-and-a-half-year-old son and has been together since 2007.

Clearly, in this rural area, urban youth culture, and its acceptance or near-acceptance of sexuality, does not prevail—people operate under much more traditional and conservative societal and religious rules.

In settings like this does the traditional value placed on having plenty of children trump Islam’s teaching of chastity before marriage?

While these two scenarios would seem to indicate that Senegalese society accepts sexuality either for reasons of modernity or tradition, this could not be farther from the prevailing attitude, and the reasoning behind these two different acceptances of sexuality could not be more different.

The interplay between modernity, religion, and sexuality has created a very interesting and complex atmosphere, particularly among the youth of Senegal. Is globalization a real phenomenon that has exported American sexuality to impact Senegalese culture? Or is it a process working from within? How will youth culture affect the societal impact of religion in the future? Will this change then influence politics, in a country where religion has historically held massive sway over the political process?

To me, these are very nuanced questions that require much more study and that I will not personally be able to sort out in the remainder of the semester, but that have been intensely interesting to observe in the time that I have been here nonetheless. 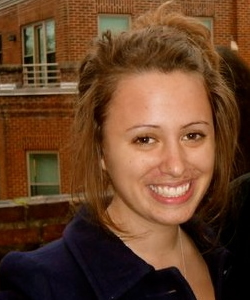 Sarah Mac Dougall graduated from Georgetown's School of Foreign Service in 2013 with a major in international economics. She participated in the Berkley Center's Junior Year Abroad Network while studying in Dakar, Senegal during the fall semester of 2011.
comments powered by Disqus