Faith and Worker Justice in the District

As I began my alternative spring break trip last week along with sixteen other Georgetown students, I had no idea that it was possible to learn so much in only seven days. Our trip – organized by Georgetown’s Center for Social Justice and the Kalmanovitz Initiative for Labor and the Working Poor – was designed to give us an overview of the biggest labor issues of today.

We spent time at various DC non-profits, including LIFT DC in Anacostia and ONE DC in the Shaw neighborhood, spoke with officials at the Department of Labor and various government agencies, and visited Washington think tanks such as the Center for American Progress and the Economic Policy Institute. We also had the opportunity to talk directly with day laborers when we visited the Home Depot on Rhode Island Avenue, and we participated in protests for workers’ rights both within DC and in its surrounding suburbs.

It was a whirlwind of a week, and although by the end of it I was beginning to understand the complexities and nuances of labor issues, I left the trip with more questions that I began with and have since spent time reflecting on how what we learned about last week fits into the social, political and economic landscape of the United States.

Interestingly enough, I noticed that these three factors seemed to intersect in a very real way while attending a religious service last Sunday at All Souls Unitarian Church, located on the border of Adams Morgan, Columbia Heights and Mt. Pleasant. As someone who was raised Roman Catholic, the service was extremely different from anything I had ever experienced. Instead of reading from the Bible, one of the ministers read a story from the Buddhist tradition. After the service, another student on the trip commented that the minister’s talk felt more like a therapy session than a sermon. And coming from a Catholic background, it was interesting to note the importance of the church members themselves within the service. While I am accustomed to a very hierarchical church structure, it seems that at All Souls, the power comes from the community members themselves.

In the context of our trip, the experience of attending a church with a power structure so different from my own was eye-opening to say the least. While visiting ONE DC, a community organizing non-profit that is actually housed in the New Community Church on S Street, we were asked to think about what power truly means and about who has power in this country today. Initial responses to the questions centered around the power of wealth in the United States, but as the discussion continued and as we spent more time with grassroots organizations over the course of the week, it became clear that another important source of power is the people. So much of the push for organizing for workers’ rights happens at the community level, and these two DC churches seem to be at the forefront of community organizing and social justice – not only because of their own member-based power structure, but also because of their commitment to social justice within their respective communities.

After doing some research, I discovered that All Souls has a long history of social and political activism. Throughout the course of its existence, the church has been involved in the fight for the abolition of slavery, civil rights and women’s rights. It has also been an activist for nuclear disarmament and a strong supporter of marriage equality. The members of All Souls truly live out their “belief in the worth and dignity of all people,” and express “[their] faith through acts of justice and compassion.” The church has been a force for social and political change since its founding in 1821. More recently, All Souls took an active role in the promotion of workers’ rights when it shared its building with Georgetown’s cafeteria workers. It was at All Souls that Leo’s workers first met and started to organize last year, and an agreement between the workers and their contractor was finally reached at the beginning of February.

While we learned so much over the course of our alternative spring break, the hour I spent at All Souls was, for me, one of the most interesting parts of the week. The church constitutes a clear example of the intersection between faith and social justice, as it has been an active participant in the struggle for human rights in the United States for almost two hundred years and continues to be a force for social change today. 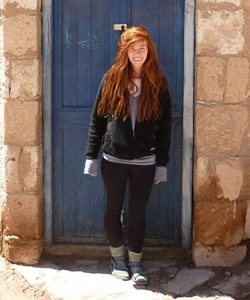 Sarah graduated from Georgetown College in 2012. She worked as a research assistant at the Berkley Center and wrote for the Junior Year Abroad Network while studying in Valparaíso, Chile in fall 2010.
Opens in a new window