Familia y Franquismo: The Social Evolution of the Spanish Woman 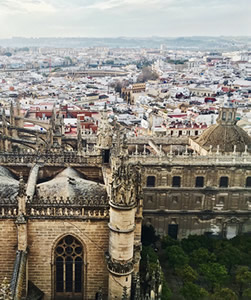 I arrived to my homestay on my first day in Spain jetlagged and timid, nervous about my first interactions with the individuals that would become my family for the next five months. All my worries were quelled, however, by a blur of dos besos and firm hugs, a quick apartment tour, and a warm conversation over a dinner of potato tortillas. As I sat at the table surrounded by my host mother, her three daughters, and her own mother, I felt a sense of belonging and solidarity, empowered and content about joining this matriarchal family.


As the semester progressed, I failed to find anything peculiar about the dynamics of my homestay. I figured Spain was markedly similar to the United States in terms of families, in that they come in all shapes and sizes. And they do. However, I later realized that this situation was remarkable, not because I joined a family composed exclusively of strong and independent women, but due to the fact that Spanish society has progressed to a point where matriarchal households are mainstream. A mere 50 years ago, this was far from the case.

Spain drastically modernized the institution of the family since the dictatorship of Francisco Franco during its rocky transition to democracy. Until his death in 1975, dictator Francisco Franco idealized conservative Catholic values and cemented the family as the basic unit of Spanish society. Under Franco, the veneration of traditional femininity, and the socialization of women to become mothers, forced women to conform to the social pressures tied to their gender. This conformity demonstrates the entrenched presence of sexism in contemporary Spanish history.

In Franco’s one-party state, women were forced back to the home in order to fulfill their “natural” purpose as wives and mothers. The female vote was revoked, women’s university attendance became practically nonexistent, and wives needed written consent from their husbands to hold a job outside of the home. The regime even forbade women from opening bank accounts without the authorization of their fathers or husbands. Traditional femininity served as the paradigm, defining women’s social worth and purpose, cementing their status as a subordinate segment of Spanish society. This lack of opportunities and forced status of inferiority supported the institution of the traditional Catholic family, and, in turn, served to solidify the power of Franco’s regime.

To understand the expectations and limits that Spanish women living under Franco’s regime faced, I talked to my host abuela. An outspoken 82-year-old woman, she was born in 1935, three years before Franco rose to power. She married at the age of 24 and lived with her late husband until his death in 2009. While she only had positive things to say about her husband, she did mention inequalities within her marriage that were products of that time period. Her husband controlled everything: the family’s money, the disciplining of their three children, and all other familial decisions. Still, she described her husband as a caring man, whom she loved very much, citing their marriage as the greatest joy of her life. The overwhelmingly positive nature of her marriage, in spite of conditions that would be considered intolerable and chauvinistic today, solidifies an important caveat: the submissive role required of the wife in Franco’s time did not guarantee a negative marriage. Inequalities in my host abuela’s marriage did not stem from the wishes of her husband, but rather the social backdrop of the time in which she lived.

With the death of Franco and the arrival of democracy in Spain, a process of political transformation and social modernization ensued. The country’s political advancement reflected a contemporaneous evolution in the understanding of femininity: women once again were viewed as competent and independent beings that could serve society outside of the home. This cultural shift promoted the acceptance of alternate models of the family and more egalitarian familial relations. My host abuela could once again vote, learn, and work without social stigma or legal repercussions.

Today my host abuela lives in a flat in Sevilla with her daughter, three granddaughters, and an American exchange student. She meets with her Catholic Bible study group twice a week, has the ability to cast a ballot (which she did for the first female Spanish presidential candidate in 2015), and visits her husband’s grave with a handful of flowers every Sunday. Not only does she serve as the rock of a matriarchal household, but also as a living testament to the social progress and the innate power of the Spanish woman.