Finding Happiness in a Janteloven Denmark

It is hard to capture the essence of a culture when you’re living in it. To describe a lifestyle of a country is to generalize, but to recount individual details of a specific impression is not expressive enough. Trying to articulate my experience thus far in Denmark has been a delicate balance between offering the common stories of the numerous "cold" Danes I have encountered and going into detail about a few extraordinarily outgoing Copenhageners I have met along the way.

Denmark is known to be the happiest place in the world, which was part of what drew me to study here. One of the most green cities in the world, Copenhagen boasts the best of everything: beautiful architecture, stellar sightseeing, modern transportation systems. I was excited to discover all this upon my arrival in a warm, Scandinavian late summer. But I was also warned: Danes can appear unfriendly and usually keep to themselves; it is hard to get them to open up.

This is a reflection of the Law of Jante, or Janteloven, which is a set of principles that is ingrained in Danish culture. There are 10 rules that focus around a common theme: You should not think you are anyone special or better than us. It is what can be considered Denmark’s 10 Commandments, or unofficial code of conduct: in a homogeneous society built on equality, no one person is meant to stand out or appear more accomplished than anyone else. But with all this negativity that permeates Danish attitude, how are Danes the happiest people around? It is this anomaly that has sent me in search of answers.

Janteloven communicates a de-emphasis on individuality and personal success. Instead, there is focus on the community. Denmark as a country has "feminine" attributes, in stark contrast to America’s "masculine" ideals of competition and ambition. The essence here in Denmark is cultivating relationships and creating a balance between work and family. I have realized that as much as Americans say that they have achieved that elusive balance, it is really the Danes that have mastered it. Perhaps the prospect of spending time with family and the ability to detach from work and relax is what contributes to Danes’ happiness.

But what about the fact that Danes pay over half their income in taxes? There are no millionaires here in Denmark; everyone lives in mostly the same lifestyle, within similar means. However, Danes see direct benefits from the large amounts they pay their government, from free healthcare to stable, established welfare programs that support citizens for extended periods of time. This assurance relieves the stress that millions of Americans struggle with every day.

There are myriad comparisons possible between American and Danish lifestyles, and I am beginning to understand why Danes are known to be so happy, even in the most contradictory sense. With low expectations, it is easy for Danes to be pleased. And they aren’t unfriendly; most people just mind their own business and do not typically engage in small talk. With a tweak of perspective, I can better weave my way into Danish mentality. Asking a Dane “How are you?” will give me a five-minute response, and they will honestly bring you into their life and share how they are feeling. There is no small talk; instead, Danes are very honest, a quality I have come to respect while living here.

I have a visiting family whom I see throughout my semester here as a way to further immerse myself in Danish culture. For a family who knew little about me, besides a few initial emails, they welcomed me right into their home several weeks ago. Just as much as I am fascinated with their life in the Danish countryside, they tell me how lucky they feel to be interacting with an American. They question me on American politics and do not hesitate to add their own views on the presidential candidates.

I am amazed at how interested they are in American culture, they speak of America with a fondness I imagine does not exist in many other European countries. Like many Danes I have met, my visiting family always comments on how polite I am (probably because there are no Danish words for "please" and "thank you" so it truly stands out), fulfilling an American stereotype I never even knew existed before coming to Denmark.

As the days have gotten shorter, we have moved inside earlier. Even with little daylight, Danes bring great hygge to any gathering. Hygge is a term that roughly translates to coziness or warmth, and it captures a feeling of closeness with people, sharing good stories, and eating typical Danish food. My Danish mom would cook a beautiful feast, and in typical Danish fashion, have many candles lit throughout the house. Recently, at one of their dinners, I looked around the table and reflected how much I have learned about Danish culture in the short time I have been here. What I heard was true: once they open up, Danes will never stop talking. They are happy by living in the moment, and more and more, I am beginning to feel I am at home. 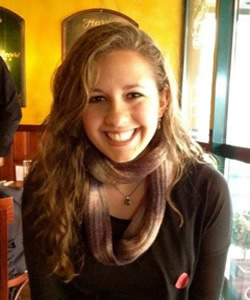 Madeline Steinberg graduated from the McDonough School of Business in 2014. She participated in the Berkley Center's Junior Year Abroad Network while studying in Copenhagen, Denmark during the fall semester of 2012.