Folklore in the Scottish Highlands

It is a Saturday morning, and I am sitting in the back of a wee red tour bus on the Isle of Skye. Our guide, an engaging and hilarious man named Danny, is telling us about the incredible geology and natural beauty of the island. In the distance, almost obscured by the pervasive mist covering the Scottish highlands, is the Old Man of Storr, a free standing pillar of stone atop a cliff. In a few minutes, we will all climb out of the bus and attempt to get a picture amidst the blustery winds and freezing rain, but for now we are content to avoid the gales and listen to Danny. He introduces the rock, and continues with his two most common phrases. The first is, of course, “I wish the weather was better for photos.” And the second: “There’s a story about this.”

These words began almost every stop on our tour through the Scottish Highlands and the Isle of Skye. There is a stereotype of the Scots as exceptional storytellers and it is no wonder why; there are so many stories to tell! Many of these tales simply retell the dramatic history of Scotland, but just as many involve fantastical creatures in wondrous environments. The latter comprise the varied folklore of the Highlands, and it was these legends that Danny often told us.

Over the course of my three-day journey into the Highlands, I learned about four of the most prominent figures in Scottish folklore—brownies (pronounced brew-knees), kelpies, fairies, and selkies. Each of these mythical creatures has certain characteristics and patterns of behavior that help humans identify them. For example, kelpies are nasty water-dwelling creatures who often venture up to land disguised as white stallions, and fairies are wee people who live in the hills and crevices of fairy glens, and often take shiny things back to their world.

These creatures seem like fantastical legends, but in fact many people in Scotland still believe in them to some extent. Sometimes their belief sounds half-hearted, perhaps stemming from an oft-repeated warning they were given as children. Danny advised us to stay away from any bodies of water with white horses nearby, lest we mistakenly wander into the path of some kelpies. However, his tone was light and ironic, suggesting he did not believe these particular tales. Yet, when he mentioned the fairies, he also told us about a time when he lost a precious ring. After months of searching, he thought to ask the fairies for their help, just in case a fairy had absconded with the ring. Sure enough, he recovered the ring right where he had left it several months before. When we asked him why he believed in fairies, he responded, “I don’t see why not to believe.”

The stories associated with these beliefs are not just entertaining; they connected me to the land and people in a spiritual way. While the Old Man of Storr is a geological marvel by itself, it becomes more beautiful when I viewed it as a sculpture created by a little brownie in honor of his best friend. I thought more about the wind whistling around the rocks on the coast when I considered that it was actually the selkies singing as they showered in freshwater pools. The folklore reminded me how astounding the land actually was, and the stories forced me to really think about the beauty surrounding me. Often when I travel, I get caught up in checking famous places off my list. Each new city and country is a chance to take photos of as many awesome things as possible, since I only have so much time in each place. However, listening to the legends about each place reminded me that there is history and mythology associated with every landmark, and that the reason many places are well-known is because they mean something special to people. When I take the time to contemplate this, I find that these places end up meaning something special to me. 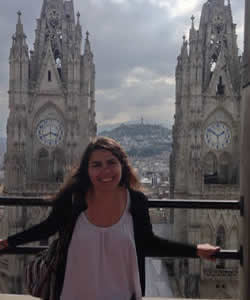 Katherine McIntire graduated from Georgetown College in 2016 with a major in biochemistry and a minor in mathematics. Originally from Sandy, Utah, during the spring 2015 semester she studied abroad in Edinburgh, Scotland at the University of Edinburgh and blogged for the Junior Year Abroad Network.
comments powered by Disqus

Reflections from a Constant Learner