On a camping trip with a group of students from my program here in Stockholm, we ventured a half hour outside the city to a nature preserve for a weekend where we spent time hiking, caving, and cooking over an open fire with a family of Swedes we met along the way. During our time around the fire cooking hot dogs, salmon, and oatmeal, we had some meaningful conversations with the family we met, and, in spending time with them, I noticed a few things. They had two children, a six-year-old boy and a ten-year-old girl. When they first got to the campsite, the boy began to climb around on a rock formation near the fire. Later into the night, their daughter was cooking with her dad, and she reached for his sharp camping knife which he readily handed to her and which she used with care as she cooked and later carved a piece of wood. The next morning, their son was running along a trail, when he slipped and fell. When he got up, his knee had a cut on it from a stone in the path, but he was undisturbed, wiped his knee, and kept running.

What I observed may have been the result of selection bias. On a weekend in the woods, what kind of parents and children are populating the campgrounds? But I couldn’t shake the feeling that these kids were more independent, strong, and level-headed than most kids I meet in the United States. Not only did the parents of these two kids allow their children to climb, run, and enjoy the forest to their heart’s content, but the kids fended for themselves, deciding when they needed help and when they didn’t.

This family, to me, embodied the mission of a Swedish phenomenon called allemansrätten in Swedish. In English, it translates to “all man’s right” or, more commonly, “freedom to roam.” Freedom to roam is a concept in Sweden that affords individuals the right to access and use public lands. Anyone in Sweden is entitled to hike, camp, pick berries, or otherwise enjoy any land greater than a certain specified distance from homes or businesses. What I noticed in the kids that we met on our camping trip was their entitlement to enjoy nature and their parents’ reciprocal acceptance of their projects and ideas for their time in the woods. Instead of keeping their kids from exploring or learning from being outside, the parents encouraged them to take charge of their own time. As a result, the kids never once complained of being bored or came crying to their parents because of something small or unimportant.

Not only does the freedom to roam mindset foster a great love of nature in Swedish society, and therefore promotes the protection of public lands and wildlife, but it also instills a sense of ownership and self-efficacy. Loving and experiencing nature at any age allows citizens to feel connected to the land, and teaching children how to enjoy it in their own way allows kids to feel like they can take charge of their free time and learn from the space around them. Instead of teaching their kids to never eat anything in the woods, Swedes teach their children which mushrooms and berries they can eat without becoming sick, and as a result, kids learn about the beauty of the place where they live.

In my time in Sweden thus far, I have been so grateful to enjoy my own freedom to roam. I love spending time outside, and because the city is surrounded by beautiful forests and lakes, climbing, hiking, and swimming outside are never more than a subway ride away from the center of the city. I always leave my time enjoying the outdoors in Stockholm feeling grounded, connected to the peers with whom I ventured into nature as well as the land of which we were able to take advantage. I have never felt more empowered to explore than in this city. Even as an outsider, as an American in Sweden, I feel responsible for the protection of the land we are free to enjoy. During my time here, I have begun to feel the culture is inherently embedded in place. Stockholm and Sweden at large are not just areas where culture is built, but where the culture of freedom to roam springs from the land itself. 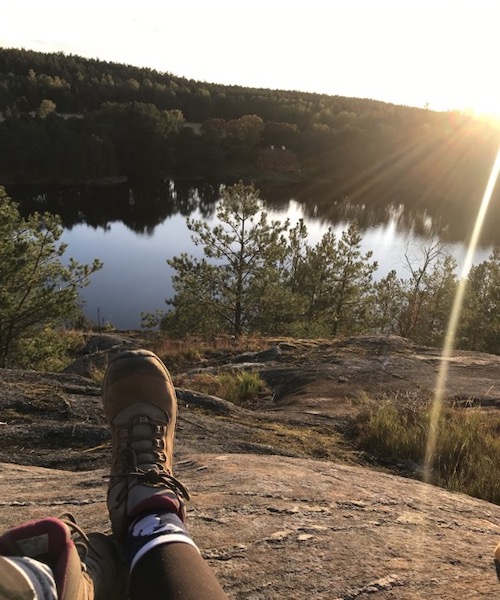