Re-examining something familiar with a fresh perspective can lead to new discoveries and realizations. Since coming home to Australia from my studies at the Georgetown campus in Washington, DC, I’ve had the opportunity to question what I’ve taken for granted or considered normal about life in Australia. This allowed me to see and recognize particular relationships between religion and culture, politics and society that diverge from the image of a very secular, multicultural country with high religious tolerance that I didn’t notice growing up here.

The biggest thing I noticed in my experience “abroad” at home is our culture of not talking about uncomfortable topics. Perhaps this stems from a belief that everyone is entitled to their own opinions, privately. Throughout my education experience, while we had opportunities to learn about and engage with religion through religion classes, we also learned that religion is not the best topic for dinner table discussion. Religion is more of a private matter. As a result, I and many other people have come to see Australia as secular and not religious. However, when I look deeper, I do see symbols of religion all around me, from churches to the fact that one-third of schools are part of the Catholic school system, and many more engage in practices such as weekly chapel services. We understand religious tolerance to mean letting everyone practice religion freely, but when someone’s religious freedom is under threat or if someone is stigmatized for their religion, do we do what we ought to do? In a culture of not acknowledging problems, it’s true that we don’t exacerbate issues by speaking them into existence. But it also means we don’t know how to identify problems that threaten our value of religious tolerance.

The same attitude applies to explicit and implicit racism that minorities in our communities confront. During my time at Georgetown, I learned that words matter, and political correctness has meaning. Race is a conversation we have so that we can be aware of issues and attempt to make our society better. In my experience living in Australia, race is a conversation that makes us uncomfortable, and we avoid it. But just because we don’t talk about it does not mean it isn’t a problem. In my own experience and through conversations with friends, I’ve heard so many stories of implicit racism including from my own peers. These range from people having “Asian”-themed parties to complaints about international students who can’t speak English well to even direct offensive attacks like “go back to where you came from.” I am not saying that this happens every day, but they are all manifestations of the same problem: a lack of awareness and a lack of a culture of “calling out” or “calling in” that brings these issues into the spotlight. Instead, people just laugh because they don’t know how to respond to these uncomfortable situations and it’s not “polite.”

As for politics, especially in comparison to the presidential election year in the United States, Australia takes a much milder approach. Politics is something that for many people almost seems to be irrelevant to everyday life. Among many young people, it’s a favorable thing to say, “I’m not into politics,” it means you are “chill.” In our electoral and government system, the prime minister has less weight and impact on Australians’ everyday life and rights than the president of the United States does for Americans. So, we rarely discuss politics too.

On the opposite side of the coin, I see a culture of “to each their own,” where we understand everyone has different opinions and we respect that difference. People are less likely to attempt to persuade others of their views and therefore see less importance in trying to change someone else’s beliefs. I think there is a greater prioritization of social harmony, and a good strategy for achieving this is to not discuss uncomfortable topics and outwardly take on a more moderate position to increase the sense of cohesion. On average, there is more listening than speaking. This makes for a great environment for fostering trust and relationships.

Coming back home to Australia with the experiences I had at Georgetown allowed me to view my life growing up with fresh perspectives. As an Australian, while there are aspects I wish and hope we would change as a society, the reasons for inertia against change also form the very culture that is core to life here which I and many others love about where we call home. Indeed, I have learned to be more reflective and thoughtful in looking at the world around me and appreciate the differences that exist between cultures, no matter how similar they may appear on the world stage. 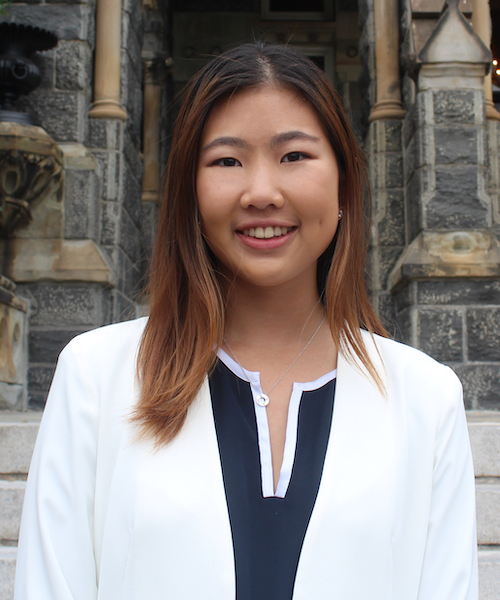 Sydney Yin (SFS’22) is an undergraduate student in the School of Foreign Service at Georgetown University, class of 2022. Sydney is majoring in science, technology, and international affairs and is part of the Global Business Fellows program. Raised in Australia, Sydney will reflect on studying abroad as part of the Doyle Global Dialogue in fall 2020.