Gender (in)equality is a fairly salient topic in the Dominican Republic. Women at INTEC, the university where I am studying, are pursuing careers in engineering, medicine, and business. On the streets, you can see that women are also infiltrating typically “male” jobs: there are more and more female policias and taxistas, which would have been completely unheard of only 60 years ago. But despite this improvement in job opportunities for women, the still-present strong gender norms, which dictate what behavior is socially acceptable, enable and encourage the practices of machismo and homophobia.

Machismo is the exaltation of all that is “macho” and is rampant in the Dominican Republic. Interestingly enough, machismo ≠ anti-feminism. As I mentioned above, strides are being made in the direction of improving and protecting the rights of women. Although machismo does not label the woman as inferior, it defines the man as superior. Gender roles in the Dominican Republic designate males as the financial providers and decision-makers, while women are seen as the nurturers and caretakers of the home. (This is still the case, despite the fact that many Dominican women are also employed and help to support their families financially.) Machistas believe that to be macho you have to be as masculine as possible (often interpreted as the opposite of feminine). To quote a male Dominican friend of mine, whose sentiments accurately reflect this culture, “Women are like flowers: beautiful and weak, needing protection.” The context of this quotation? Why women should be housewives instead of working. The argument I have heard repeated is that women’s hearts are “weaker” than men’s; we are too “emotional.” After watching Lucy, another male Dominican friend commented, “That’s why women shouldn’t be allowed to carry weapons,” because they are “too emotional and therefore irrational.”

There is no gender neutral. When Alta Gracia, the clothing factory where I am interning this semester, received a large donation of American school supplies, I was called in to help organize and distribute the materials into backpacks. The materials were sorted by age groups but also categorized by gender-appropriateness. The women who sorted the school supplies were very strict about the color and design of the notebooks that were for girls and which were for boys: pink with teddy bears or unicorns or blue and green with crocodiles or race cars, respectively. Most likely because gender equality is a passion of mine, seeing these gender norms so strictly followed was unsettling; I couldn’t help but ask myself as I sorted, “But what about the girl who really likes race cars? Shouldn’t she get to choose which notebook she wants?” Of course, for efficiency and for fairness, it would be illogical to have each child choose his or her supplies, but in the back of my mind I thought of the influence these little details could have on the children’s development and gender identity.

Another instance where I noticed these gender norms in everyday life occurred over lunch at my home. As my family and I sat down to eat, my cousin Jimena poured everyone a glass of water. Juan Rafael, upon receiving his water in a pink cup, immediately refused it and asked for another. His reason: boys can't drink from pink cups. Juan Rafael is only 11 years old. Later in the week, the topic resurfaced when another cousin of mine, Freddy Alejandro, who is five years old, said that he liked my pink shirt, and Juan Rafael commented again that boys should not like the color pink. This time I confronted him; I asked him if that means girls are not allowed to like the color blue. He was surprised by my question and said, “Claro que no” [of course not]. I tried to explain to him that colors are for everyone and no one color could make someone more or less manly or womanly. Unfortunately, my one gender-equality rant won’t erase the 11 years of gendered socialization he has received, and he probably will still avoid drinking from pink cups. 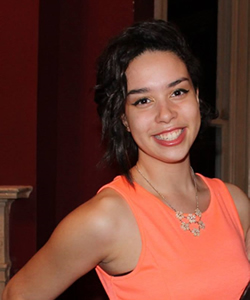 Alejandra Baez graduated from Georgetown's School of Foreign Service in 2016, where she majored in regional and comparative studies, concentrating in Western Europe and Latin America. From Boston, Massachusetts, she spent the fall 2014 semester abroad in Santo Domingo, Dominican Republic and the spring 2015 semester in Salamanca, Spain, blogging from each location as part of the Junior Year Abroad Network.
comments powered by Disqus