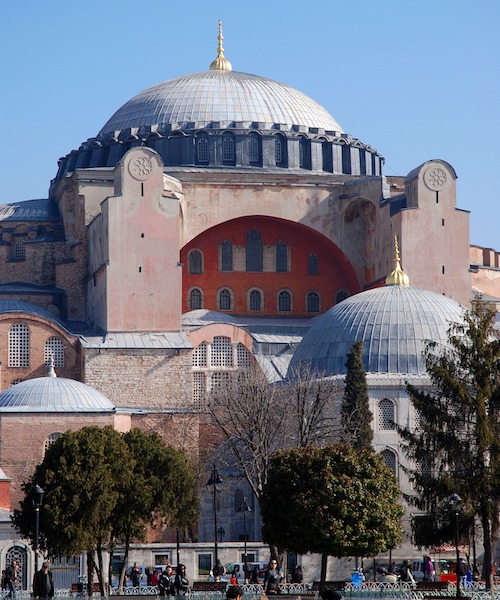 Lockdowns, business closures, and restrictions on movement to protect human life and dignity from the effects of COVID-19 come with challenging consequences. Governments everywhere struggle to confront pandemic conditions and the accompanying economic crisis. In Turkey, politics around COVID responses take on religious dimensions, notably apparent in steps to convert the Hagia Sophia from a museum into a mosque.

Completed in 537 by the Byzantine Emperor Justinian I, the Hagia Sophia has stood for more than 1,500 years. It was the world’s largest church for nearly a thousand years as well as the center of Orthodox Christianity, home to the Orthodox patriarch. Though originally built as an Orthodox church, it was spared destruction during the Ottoman conquest of Istanbul in 1452 and was later converted into a mosque at the command of the Ottoman sultan. After World War I and the partitioning of the Ottoman Empire, Mustafa Kemal Ataturk, founder of the new Republic of Turkey, made the decision to convert the Hagia Sophia into a museum, as part of a broader secular movement inspired by the French tradition of laïcité. Calls to transform the building back into a mosque have come from Turkish nationalists, pious Muslims, and others.

Against this historic backdrop, the museum-mosque discussion straddles several divides: first, between Orthodox Christians and Muslims; second, Turkey and Greece, which sees itself as the guardian of Greek Orthodox sites in Turkey; and third, the religious and secular divide that is core to Turkey’s modern history. In recent years, the government has used potential plans to convert the building into a mosque as a tool of national and religious rhetoric. The controversy ricochets well beyond Turkey, as the Hagia Sophia has long been both a symbol of Christian-Muslim tensions and an aggravation to those tensions.

With the COVID-19 emergency, Turkey’s economy is projected to contract by 3.8% in 2020 (World Bank estimate). Before COVID-19, Turkey already faced discontent amid increasing authoritarian trends following the 2016 coup. The projected economic contraction is a blow for Turkey’s ruling party, the Justice and Development Party, following high economic growth and quality of life improvements over most of its 18 years in power. The ruling party, however, lost control of Turkey’s capital, Ankara, and its largest city, Istanbul, in municipal elections in 2019 for the first time in over two decades. Now the pandemic has led to some 5,241 deaths from COVID-19 in Turkey and a rising number of cases.

The Turkish government is taking steps towards reopening the Hagia Sophia as a mosque. On May 29, the anniversary of the Ottoman conquest of Istanbul, Friday prayer celebrating the reopening of mosques around the country was held in a square in front of the Hagia Sophia, the location where many people gather annually to petition for its conversion into a mosque. A pending court ruling on the issue may portend a final decision.

The repercussions of the Hagia Sophia debates extend well beyond Turkey’s domestic politics, spilling into international arenas, religious and diplomatic.

The Patriarch of Constantinople remained in Istanbul after the Ottomans captured Constantinople. Patriarch Bartholomew I is considered first among equals among Orthodox Church leadership, a voice and convener with global influence, coordinating and fostering unity between the different patriarchates and churches of the Orthodox world. The Patriarch of Constantinople’s voice matters not just in Istanbul, but to the broader Orthodox community globally (about 260 million people). Reacting to the Turkish government’s recent action regarding the Hagia Sophia, Patriarch Bartholomew spoke out against its use as a “cause of confrontation and conflict,” arguing that because of its 1,400-year role as a place of worship for both Christians and Muslims, the conversion of the Hagia Sophia into a mosque will promote fracturing and tension between the Muslim and Christian worlds during a time when the experience of a shared global pandemic requires “unity and common orientation.” The Hagia Sophia’s status as one of civilization’s great monuments is, he argues, a responsibility that the Turkish people must rise to meet. He suggests that the Hagia Sophia “can function as a place and symbol of encounter, dialogue and peaceful coexistence of people and cultures, mutual understanding and solidarity between Christianity and Islam.” Other Orthodox community leaders have joined in opposing the Hagia Sophia’s conversion. The head of the Russian Orthodox Church, Patriarch Kirill, called the conversion of the Hagia Sophia a threat to spirituality and history, noting the decision’s roots in Turkey’s domestic politics.

The topic affects Turkey’s relations with its neighbors and international partners. The Greek government, with which Turkey already has a tense relationship, has stated that the decision would “create a huge emotional chasm between the Christians of the world and Turkey.” The EU vice president for promoting the European way of life, a Greek national, indicated that the Turkish government’s actions on the Hagia Sophia and other areas could impact its relationship with the European Union. Finally, U.S. Secretary of State Mike Pompeo warned that a change in the building’s status would diminish its status and its role in serving as a bridge between individuals and communities of diverse faith traditions. Turkey also hosts over 3.5 million refugees from Syria, Afghanistan, and elsewhere, compounding the burden of COVID-19 and complicating its international relationships.

The Turkish government insists that, despite its unique role and history, the status of the Hagia Sophia is a domestic and internal issue, objecting to international interference in Turkey’s affairs. Turkey’s highest administrative body, its Council of State, stated on July 2 that a decision on the legality of the conversion of the Hagia Sophia would be made within 15 days. The actions are seen as directed to bolstering the party’s support among domestic constituents.

Tensions around the Hagia Sophia began long before the COVID-19 pandemic. They illustrate well, however, the dangers of heightened tensions affecting domestic politics that spill well beyond into international affairs, at a time that calls for strong leadership with long-term development objectives clearly in mind and concerted international cooperation and action.