Central District in Hong Kong is the Wall Street of Hong Kong, the Soho of Hong Kong—it’s at the heart of Hong Kong. Question is, does it carry with it Hong Kong’s true colors? Behind the billboards proclaiming Hong Kong as Asia’s best city, and beyond the walls of wealthy expat homes, is a rich history of Southeast Asian migrant workers in Hong Kong, a story of their triumphs and struggles, of conflict and peace.

On a Sunday, if you take a stroll in Central, you’ll find a large community of Filipina maids sitting under the HSBC building. If you keep walking, you’ll realize they’re actually everywhere—sitting in parks, playing cards on bridges, blocking walkways—laughing with their country folk and enjoying their only day off.

Additionally the Filipino government implemented the labor code of 1974, which “exported” Filipinos overseas to generate more revenue and deal with the ongoing financial struggle. According to the Financial Times, every overseas maid supports around 5 people back home. In 2005, it reported that the total income of the overseas maids was $10 billion. Legal amount remitted to the Philippines was 5 to 6 percent of the Philippines’ GDP. The former Filipino president Fidel Valdez Ramos called these overseas workers “the new heroes of the Philippines.”

For our History of Southeast Asia class, my team and I interviewed a sample of 50 people, ages ranging from 18 to 65+, gathering opinions of local Hong Kong residents, local students, professors and staff, 65+ Hong Kong citizens, and international students. There was no distinctive discrepancy amongst the opinions gathered. Many of them associated Filipinos with domestic helpers. They saw them as part of the lower rung of the socioeconomic pyramid but nevertheless were affectionate towards them because many of them were raised by Filipinos or employed them.

In recent months, the relationship between Hong Kongers and Filipinos, however, has soured due to the controversial issues on the right of abode as well as the 2010 Manila Hostage Crisis. Foreign domestic helpers have been campaigning for their right of abode. However, the government and Hong Kong residents have rejected their clamor and plea for fear that by granting these helpers permanent residency, an influx of foreign domestic helpers will ensue. These workers who have worked in Hong Kong all their lives and even have children who grew up in Hong Kong claim that Hong Kong’s immigration laws are unconstitutional.

This has caused tension between the locals and the Southeast Asian population. Drawing some comparisons between the Southeast Asian immigration situation in Hong Kong and the Mexican immigration situation in America, though of course both cases have different histories and legal backgrounds, I believe that both draw out local fear that “foreigners” will “take their jobs.” Perhaps beyond these economic worries, these situations both consequentially generate racism against those who are trying to obtain legal residency.

Moreover, the Manila Hostage Crisis last year has generated great bitterness. The dismissal of senior inspector Rolando Mendoza of the Manila Police District sparked this incident. Mendoza thought he had been unfairly dismissed and wanted to get his job back. Thus he hijacked a bus of Hong Kong tourists. Negotiations slowly progressed over 10 hours as Mendoza started releasing a few Hong Kongers.

However, when the police arrested Mendoza’s brother, negotiations broke down and Mendoza shot open fire. The gun battle that caused deaths and injuries of Hong Kongers were watched on television as it happened. The Filipino government has not issued any formal apology to Hong Kong. This has instigated widespread anti-Filipino sentiment. The Hong Kong government blacklisted the Philippines and has issued the most severe travel alert. There were often cases where Hong Kongers would fire their Filipino maids as a result of this incident. Prior to the incident, the general Hong Kong perception of Filipinos had been neutral if not positive. However, after the shooting, there has been a drastic change in opinion.

In order to deconstruct and understand how the Hong Kong people have formulated their perception on the Philippines and its people, I interviewed international students from different countries and compared their views with those of local Hong Kongers. I came up with the hypothesis that Hong Kong’s colonialist past has influenced the perception of the Philippines and its people.

First, I interviewed Americans on their perception on the Philippines and its people. Because America is such a heterogeneous country where a majority of the population are immigrants themselves, most people see Filipinos as they see any other race. Racial discrimination is also not as publicly expressed in America, since it is more or less taboo in such a diverse country. Additionally, the Filipinos that most Americans interact with are much more prosperous than the Filipinos in Asia. Overall the American attitude is neutral if not positive.

On the other hand, when I interviewed South Korean students, their perception was generally negative. South Korea is a homogeneous country. It is also a very nationalist and patriotic country that tries to protect the unity of the people. Korea’s cultural standards of beauty, as well as its own fear of migrant workers, are the driving forces behind discrimination against Filipinos. In terms of beauty, South Korean media emphasize light skin over dark skin, especially seen in the rising phenomenon of whitening creams in all the Korean cosmetic shops. People with darker skin are regarded as a Third World Asian. These initial assumptions are exacerbated by a recent rise in migrant worker crime rates and the rise in the migrant population. As a result, the Korean government’s campaign on cultural immersion and exchange was widely opposed by Koreans. You could say xenophobic sentiment has gripped the general population.

Hong Kong is not heterogeneous like the United States because its majority is still comprised of ethnic Chinese people. It is also not homogeneous like Korea because there are many foreigners, and it had been under British colonialist rule until 1997. Hong Kong thus holds that medium where the idea of outsiders isn’t completely foreign to the people, but at the same time there is a majority ethnic population that controls the general sentiments of Hong Kong. Perhaps this is why Hong Kong’s general sentiment towards Filipinos has been neutral. Only recently because of the hostage crisis has their views become negative.

However, this negative view does not root from racism or other irrational sources. Rather, it reflects the consequences of the hostage crisis as well as the deteriorating diplomatic relationship between the governments of Hong Kong and the Philippines. 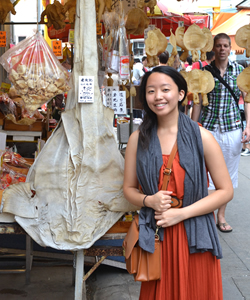 Joohee Kim graduated from Georgetown's School of Foreign Service in 2013 with a degree in international economics. She participated in the Berkley Center's Junior Year Abroad Network while studying in Hong Kong during the fall semester of 2011.