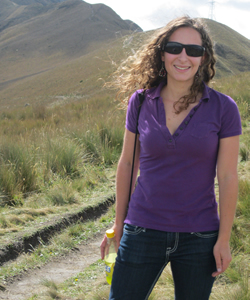 It was my second day in Sociedad y Derecho (Society and Rights), a pre-law course of about 25 Ecuadorian students plus myself. We had been discussing immigration and assimilation in the United States when one student mentioned this distinction between Jews and other immigrants. I chose to listen to others' responses rather than share my opinion, and found that most of the class and the professor were in agreement that Jews, in the United States or in Ecuador, were a special kind of minority. How assimilated or not are Ecuadorian Jews? What truth is there to the assumption of “domination” held by my classmate?

To give some background, there have been Jews in Ecuador since the Spanish conquest in the 1500s, but these early Sephardic families almost completely assimilated or disappeared; by 1904 there were only four Jewish families in the entire country. A new wave of immigration to all American countries began as the Nazis rose in power in the 1930s.

The Jewish population in Ecuador peaked at 4,000 in 1950, most of whom lived in Quito and other urban centers. They were legally restricted to agriculture or industrial occupations, but most worked as merchants or professionals who soon became successful—roles previously played by Syrian and Cuban immigrants.

Currently, the Jewish community is much smaller. The Comunidad Judía del Ecuador, a congregation and community organization in Quito, estimates their active membership at 500, and when I attended Rosh Hashanah and Yom Kippur services, about 300 were in attendance. Is this community insular, culturally distinct, and economically powerful, or a reflection of broader Ecuadorian society with the only difference being their religion and history in this country?

One factor that might suggest a lack of assimilation among Ecuadorian Jews is their education. The Jewish community has a K-12 school, the Colegio Experimental Alberto Einstein, which teaches traditional subjects along with Hebrew and Jewish studies. However, only about 10 percent of the students are Jewish, the rest being Catholic or Christian students from wealthy families.

Another aspect Jews share with upper-class Ecuadorians is that virtually everyone speaks fluent English, but the Jews differ in that they learn it as a child within the community (often as a first language), not simply in school. And while many wealthy or upwardly-mobile Ecuadorians spend a year studying in the United States, almost all Jewish students spend their entire college years in a American university.

At the same time, everyone in the community speaks fluent Spanish. Educational practices and language suggest that while there is strong cultural preservation and some differences with even the most affluent Ecuadorians, Jews are in contact with the Spanish-speaking non-Jewish population to a sufficient degree to allow for assimilation.

Economically speaking, the Jews I have met definitely seem to “dominate” in that they are very well-off and either self-employed or professional. While many well-off Ecuadorians live in large apartments in nice neighborhoods, the Jewish homes I have visited thus far are clearly even more wealthy; for example, you can flush the toilet paper rather than throwing it in a waste basket, they have two or three maids instead of one, and the dining rooms comfortably seat 30 people. One man runs his own radio show, another family has a wide-spread bakery chain, others are professors or high-level bureaucrats, and many have their own business.

I believe that while Jews in Quito have a strong identity and wield economic power, they are fairly assimilated, culturally speaking. They speak Spanish, do not keep kosher, and many have non-Jewish Ecuadorian spouses. At the same time, their command of English and business prowess has allowed them to “dominate” sectors of the Ecuadorian economy, just as my classmate observed.

After reflecting on this theme, I am left wondering to what extent Jewish and non-Jewish youth interact, whether or not the importance of their identity is decreasing by generations, and finally if there are lower- or middle-class Jews in Ecuador. How are they assimilated or not into the wealthier Jewish community, or the poorer Ecuadorian society?