Argentina is an overwhelmingly Roman Catholic country, with an estimated 80 to 90 percent of the population having been baptized. However, this statistic can be a misleading account on the religious life in Argentina, and especially in the capital city of Buenos Aires. While there is certainly an abundance of Catholic Churches throughout the city of Buenos Aires, there is a very low percentage of practicing Catholics, estimated around 20 percent for the country, and an even smaller number for the city.

About two blocks from my house is the parish of San Bernardo, a neighborhood parish in the Villa Crespo section of Buenos Aires. The parish community consists mostly of people within a five block radius of the Church, many of whom have lived on the same block their entire life. Aside from the obvious difference of the Mass being in Spanish, much of the experience is very similar to what I am familiar with in the United States.

One small change is that there is a person from the congregation that acts as a narrator for the Mass, constantly giving instructions to sit, stand, kneel, and leading the prayers. Oftentimes this person will have a running dialogue with the priest during the Mass through the microphone, which seems unusual at first, but then it just becomes something of second nature. The only thing I can compare it to is the David Letterman—Paul Shaffer relationship on CBS’s Late Show: the narrator at the side of the altar is always the first to laugh at a joke in a homily and has no hesitation in interrupting anything the priest is saying, much like the late night duo.

This is also the same Church that I was asked to be a lector at after moving into the neighborhood about 12 hours earlier. I turned down this offer by explaining I had just arrived to the country and was still not comfortable enough with the language to read from the altar. The same woman who asked me to read spots me every few weeks, and I can tell she wants to ask me again, but I think that I will wait until the end of the semester before joining the Letterman/Shaffer team on the altar.

While Argentina is certainly a Catholic country, religion does not really affect everyday life, especially for residents in bigger cities like Buenos Aires. Even with an abundance of churches, it would be very easy for someone to live in the city for months and never experience anything that reminded them of the strong roots of Catholicism in the country. Feast days are not particularly important, Masses are sparsely populated, and any holidays are usually for liberators or independence, certainly not set by the Church calendar.

The only daily experience I witness is a couple of Porteños (the name for a resident of Buenos Aires) who touch a painting of the Blessed Virgin Mary in an underground subway station and then follow that with a quick genuflection. Aside from this small outward act of faith affirmation, the religious experience in Buenos Aires can be almost nonexistent to the casual observer.

When I have traveled to smaller towns in different provinces of Argentina, such as Tilcara and Humahuacha in the province of Jujuy, the importance of religion and community are much more visible. These small towns were constructed centuries ago with faith as a focal point; each town plaza will always have a modest church that will be visible from almost every part of town. Some of these more indigenous towns that have not been exposed to many of the advances taking part in the larger cities in the last few decades offer a rare glimpse into a thriving religious community that still lives a very simple and devoted life. The contrast could not be any greater from the bustling city of Buenos Aires.

I am fortunate enough to be attending three universities in Buenos Aires which has provided me three very different educational experiences. One of these universities is Pontificia Universidad Católica Argentina, the country’s private, Catholic university. I did not have much of an idea of what to expect taking classes here, but I assumed that it couldn’t be too dissimilar from Georgetown.

This was a naïve assumption that became glaringly obvious. Like all other universities in the city, there is no central campus; the university consists of a handful of former shipyard docks converted into beautiful classrooms and libraries in the last decade. Aside from the names on the buildings and the almost life size portrait of Pope John Paul II in the basement, there is hardly anything concrete that would indicate to anyone that it is a Catholic university. In three months of classes I have yet to see a priest or nun. There is no chapel, no choirs or bands, no visible prayer groups; really, there are no advertisements for student groups for anything religious at the country’s preeminent Catholic university.

The school is much more concerned that people are following the dress code (no shorts, and anyone without a collar on their shirt will receive numerous disapproving glares) than receiving a religious education. Perhaps these things can change, since it is obvious that the university is still trying to find its identity since it is a relatively new institution.

Life in Buenos Aires, while at times challenging and frustrating for the seemingly backwards way many things run, has never ceased to be exhilarating. Living here is very similar to what life is like in New York City: late hours, ethnic neighborhoods, religious diversity, and enough to do within the city to keep busy for a few years. I have truly enjoyed everyday in Argentina and the opportunities it has provided. In future posts I will describe some of the unique experiences here and focus on the cultural differences between this great country and the United States. 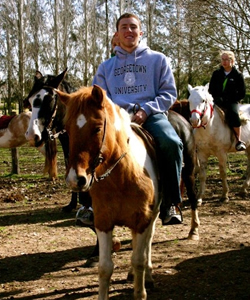 Colin O’Brien graduated from Georgetown College in 2013 with a major in government. He participated in the Berkley Center's Junior Year Abroad Network while studying in Buenos Aires during the fall semester of 2011.