During my time in Galway, Ireland, I had the opportunity to participate in a course called Philosophy for Children. This course, abbreviated to P4C, was a service-learning course where I taught philosophy in an Irish primary school. At first, the idea of teaching philosophy to fourth graders seems pointless; Jean Piaget, a cognitive philosopher in the early 1900s, noted that children do not have a mature enough brain to develop philosophical thinking skills. Despite the impulse to push aside children in the realm of philosophy instruction, my professors introduced the P4C pedagogy to improve critical thinking and argument building skills in children. My experience teaching philosophy in a Galwegian elementary school not only opened my mind to P4C, but it also allowed me to reflect on how the Irish identity is built into the school system.

During this service-learning course, our time was split between learning pedagogical principles and teaching practical philosophy in a primary school. We learned how to give children the tools to develop arguments, live with virtue, and ultimately become a “contemplative in action,” one of the Jesuit values of the school. I was fortunate to be paired with my co-teachers, Hallie Della-Volpe, a junior from Williams College in Massachusetts, and Sophia Fraser, a junior from Richmond University in Virginia. Every Tuesday morning, we walked 20 minutes through the inevitable rain to The Jes, a private Jesuit school in Galway. We were assigned to a rambunctious group of 31 fourth-graders and, as a team, figured out how to best create a philosophical learning community with them.

At first, we were concerned about communication issues. The Jes is an all-Irish school, meaning that all of the classes are taught solely in Irish. When we first walked into the fourth-grade classroom, we saw signs that said, a haon a dó a trí next to the numbers 1, 2, 3. We looked at each other, realizing that the standard teaching supplies were all in another language. After a slight moment of panic, we talked with the classroom teacher and realized that we were allowed to teach philosophy in English. Using the Irish language in primary school, however, is not unique to The Jes. The Irish language is a compulsory subject in all government-funded schools, and even private schools (like The Jes) opt to teach in Irish in hopes of keeping the Irish language alive.

After we entered the classroom, we would arrange 31 little chairs into a circle, creating a space that fostered discussion. First, we presented our students with a stimulus, such as a book, image, or short video. For example, one week we presented a broken clock as a stimulus for the class. The students then came up with philosophical concepts from the stimulus, such as “time,” “utility,” “annoying,” or any other concept they associated with the clock. The students would then use these concepts to create a philosophical question. In this particular class, they created the question, “Should we value time?” The class then had a philosophical discussion on their various positions, using reasons, examples, and counter-examples to progress the discussion. Among others, our class also discussed the questions, “Is success always winning?” and “What is more important: silliness or seriousness?” While the class developed insightful questions, some were problematic to the Irish identity.

Because of the strong Catholic national identity in Ireland, The Jes did not allow our students to discuss philosophical concepts related to religion. The Jes did not want to create discussions would lead to a different position than a Catholic one. The students would sometimes create questions such as, “How did life begin?” or “Is heaven real?,” and these questions could not be discussed because of their connection to religious values. By prohibiting these questions in P4C, The Jes showed how they did not want to threaten the fundamental identity of the school’s religious culture.

Learning about the education system in Ireland provided insight into the country’s national values. In my previous blog posts, “What Does Rugby have to do with Catholicism” and “Protecting Irishness: Threats to the Irish Language,” I explored how Catholicism and the Irish language play a role in the Irish identity. However, by teaching philosophy to children in Galway, I learned the depth of these national attributes. The values taught within these schools are a reflection of the identities held by the country as a whole. Ultimately, the limitations we faced in The Jes classroom, such as the education being in Irish and not being threatening the Catholic religion, shows how the Irish language and Catholicism are central to the Irish identity. 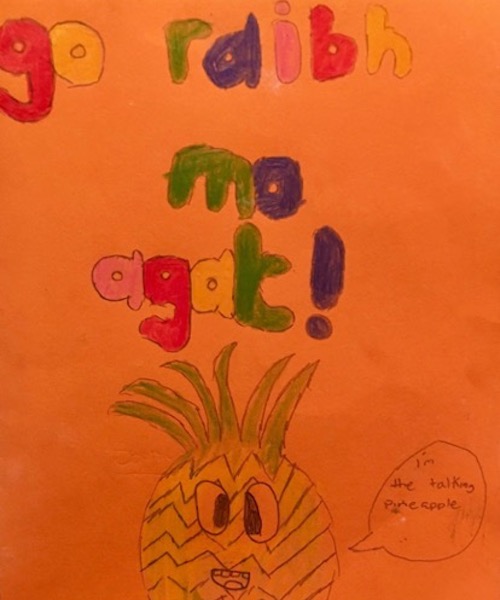