Jennifer Lang on Islam in Senegal

After taking a class on the Qur'an and Islamic literature at Georgetown, I expected to arrive in Senegal with a fairly clear understanding of the pillars and associated practices of Islam. Senegal, an overwhelmingly majority-Muslim country, features Islamic architecture, a blaring call to prayer at all hours of the day and night, and conservative dress. However, after living and learning in Dakar, the capital port city, for just over a month, I have come to discover that Senegalese Islamic practice differs much from that of the religion’'s birthplace, Saudi Arabia.

Senegalese culture contains a mixture of Islamic, French colonial, and traditional African and tribal legacies. Islam was first adopted by the aristocrats of the Tireku Empire in the north of Senegal after exposure to Arabian trade caravans. The royals converted to Islam to gain the literary prestige of the Arab language while maintaining their traditional religious practices, which were largely based in healing figures called marabouts. With colonization, tribal aristocrats allied with Europeans to profit from the slave trade, yielding strong coastal villages and an inland devoid of security. Though slavery always existed in caste-based traditional African societies, marabouts detested the transition from a lineage-based system with the opportunity to purchase freedom into the commodification of free persons. With their separation from the aristocrats, marabouts and Islam presented an alternative discourse which peacefully opposed colonization. Devoid of the security they had once felt under the rule of the aristocrats, local citizens began demanding rights and equality—demands met satisfactorily by the communally-based Islam.

With mass conversion to the Islamic faith and the peaceful opposition to colonization, one would expect that the Senegalese post-colonial landscape resemble much of that of the Islamic Middle East. An integral, and unique, facet of Senegalese Islamic opposition to colonialism is the individualistic, ethical dynamic— leading Senegalese Muslims to adopt Sufi practice instead of the more widely known Sunni or Shi'a practices. Sufism is characterized by an intense personal dialogue with God, spawning beautiful poetry and music. I highly recommend the music of Youssou N'Dour, the king of Senegalese mbalaax and a singer who addresses both popular and Islamic themes.

However, the individual nature of Sufism is tempered in Senegal due to the long-term exchange between Islamic and traditional cultures. In contemporary society, marabouts remain their spiritual and political power as heads of brotherhoods. The four major Senegalese Muslim brotherhoods differ only in their region of origin, and as such they have helped synthesize local practices with the Islamic faith. Each brotherhood takes its own pilgrimage to their Senegalese holy city, but there is rarely conflict between the brotherhoods because of their unity of belief. Moreover, each individual Muslim has a marabout to serve as spiritual guide. The major marabouts greatly influence political action, voting patterns, and public behavior; small marabouts teach Qur’'anic recitation in schools. The development of brotherhoods led by marabout helped Senegal to resist Arabization in conjunction with Islamization.

The resulting religious practice is largely synchretic. Young Muslim men wear necklaces featuring the picture of their marabout—a type of fetish strictly prohibited in Islam. The majority of Senegalese Muslims can read Arabic and recite the prayers of the Qur’'an but do not know their meaning. The average Senegalese continues to wear and keep gris-gris on their person and in their home, amulets blessed and designed by marabouts. Young Senegalese women avoid going to mosque to practice because their presence could encourage sinful thoughts in others. Perhaps most unnervingly, the marabouts receive no questioning to their legitimacy as political as well as religious leaders. This has led to a number of phenomenons, most prominently unlearned scholars posing as marabouts in religious schools and manipulating their students into begging in order to teach humility.

One of the participants in our American program is a Muslim student, and she has commented several times that she feels as lost or more than her peers navigating the religious landscape. The syncretism that characterizes Islam in Senegal raises several questions. In a community which stretches across borders of nationhood, ethnicity, and background, how much can the Senegalese identify with the overall Islamic community? Moreover, as the world—from an Occidental perspective—appears increasingly polarized between developed and under-developed, secular and religious, where does Senegal lie? As all things in the study of government and of people, the answer lies in a continuum and not on the extreme. Still, I hope to continue to explore the interaction between the traditional, Occidental, and Islamic in Senegalese religious practice over the next three months. 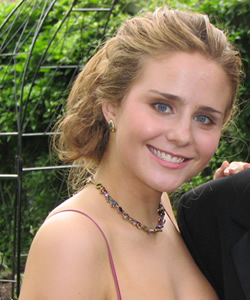 Jennifer Lang graduated from Georgetown in 2010 with majors in government and French and a minor in theology. She participated in the Berkley Center’s Junior Year Abroad Network while studying in Dakar, Senegal during spring 2009.
comments powered by Disqus